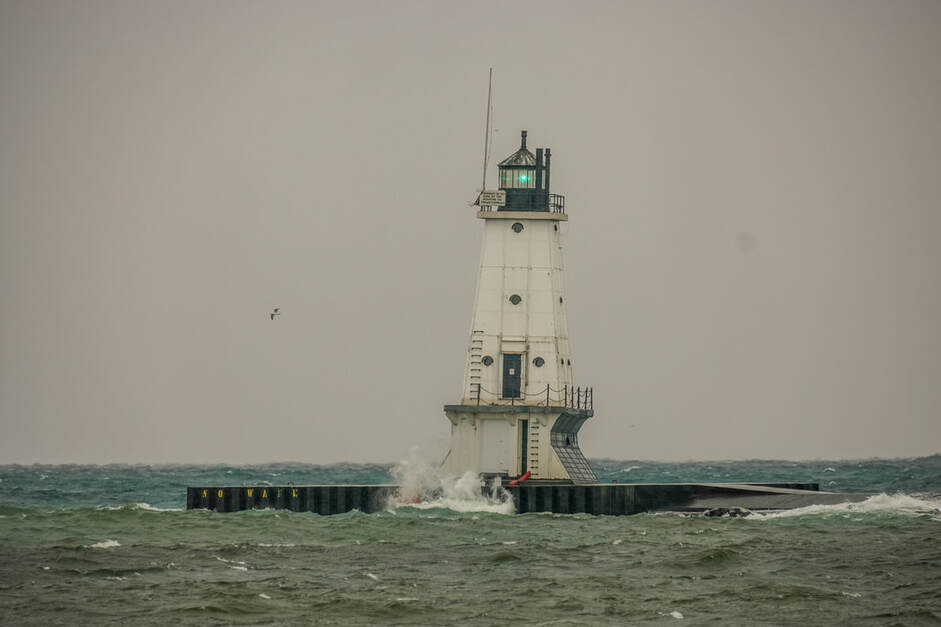 Originally published 12/16/2022
Judgement calls are important.  This morning we rose, looked at the weather, and made a field decision to blow off the last 3 lighthouses on the west coast and head north hard.  Heavy bands of lake effect snow was forecast for our previously planned route, and it did not look very good.  We photographed the last lighthouse, about 1/4 mile from the hotel we were at and got out of town.
The lighthouse was unusual as it was square...and I did want to see it.  It remained very windy, gray, and colder than dammit.  Laurie got out and shot a few photos and scurried back in the truck.  I figured out how to put my 350mm telephoto on the monopod and rest it on the door......and I shot from inside the truck!  It was much more comfortable than outside and I doubt the photos would have been any better.
It is a big, square thing, and very unique looking.  The lighthouse looked crooked to me though.  I work in construction and I have an eye for something that is out of plumb....and this lighthouse looked out of plumb!  Who would build a lighthouse out of plumb?  The answer is nobody.  But the cribbing this lighthouse was originally built on collapsed in 1994 and it was decided to stabilize it and leave it where it stood, out of plumb. 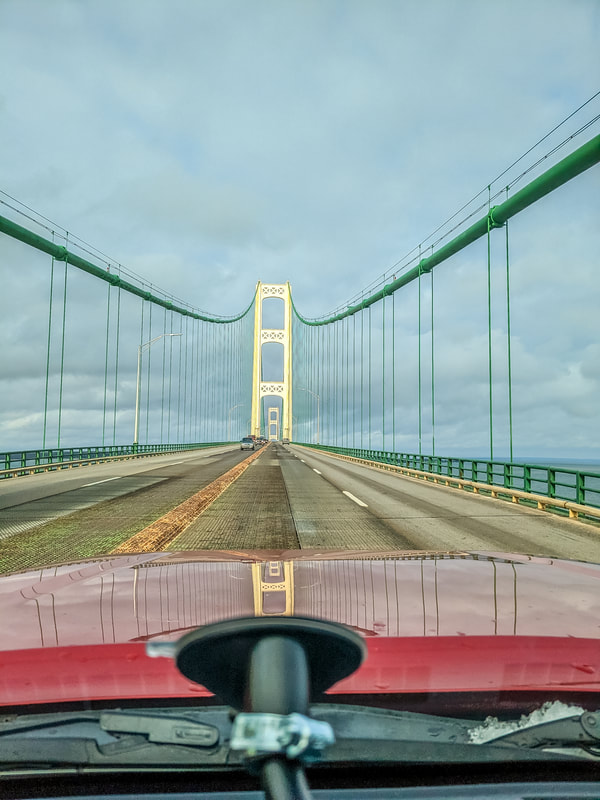 We drove across a frosty and frozen central Michigan, getting north via the shortest route.  At blog writing time it snowed all day where we were at this morning.  Ludington is buried in lake effect snow and expecting 5-9 inches MORE tomorrow.  This is how field calls work.  Take the info you have and make the best decision you can.  Quickly.  The roads are littered with dead squirrels who were unable to decide.  We are not dead squirrels.
We crossed the Mackinac Bridge, from Mackinaw City to St. Ignace.  You can see the bridge in the header photo for today's blog.  It's BIG!  The toll to go across is Four bucks, collected on the north shore.  Mackinac Island is quite visible from the bridge and Lake Huron is on your right and Lake Michigan on your left as you cross. When the weather is really bad, the bridge will close.  It has to get pretty bad, but we didn't want to chance it with all the lake effect snow coming. 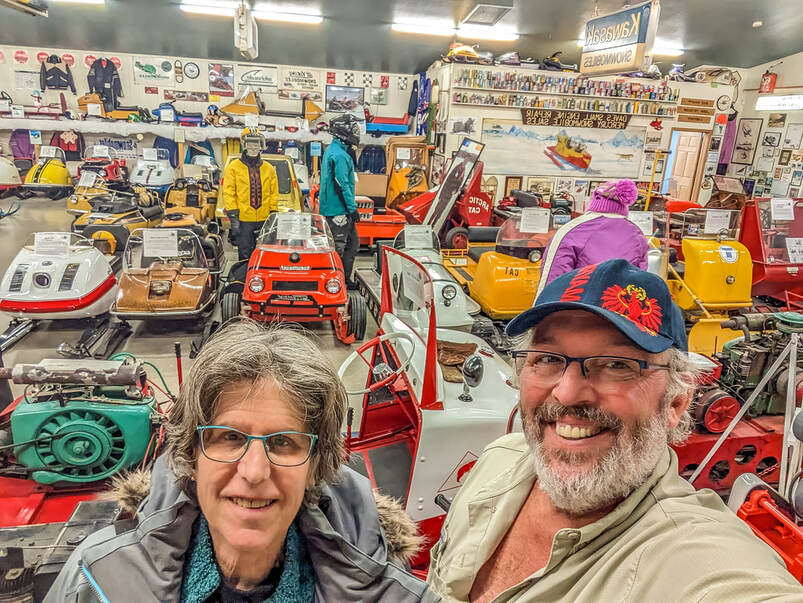 In the Top of the Lakes Snowmobile Museum!

About 40 miles west of St. Ignace on Michigan's Upper Peninsula is a town called Naubinway.  It is a tiny place, with a population of 147.  It is the northernmost point on Lake Michigan, called "The Top of the Lake".  It is also home to the Top of the Lake Snowmobile Museum.  As we are headed to Montana to snowmobile at Yellowstone, we thought it quite appropriate to make a stop!
Admission is $5 and it is a non-profit.  It is also AWESOME!!!!!!!!!  I have no idea how many snowmobiles are in the museum but I'm guessing close to a hundred.  Antique sleds from back in the 20's and 30's, a snowmobile that actually traveled to the North Pole, historic snowmobiles........SO much to see!  It was wonderful! 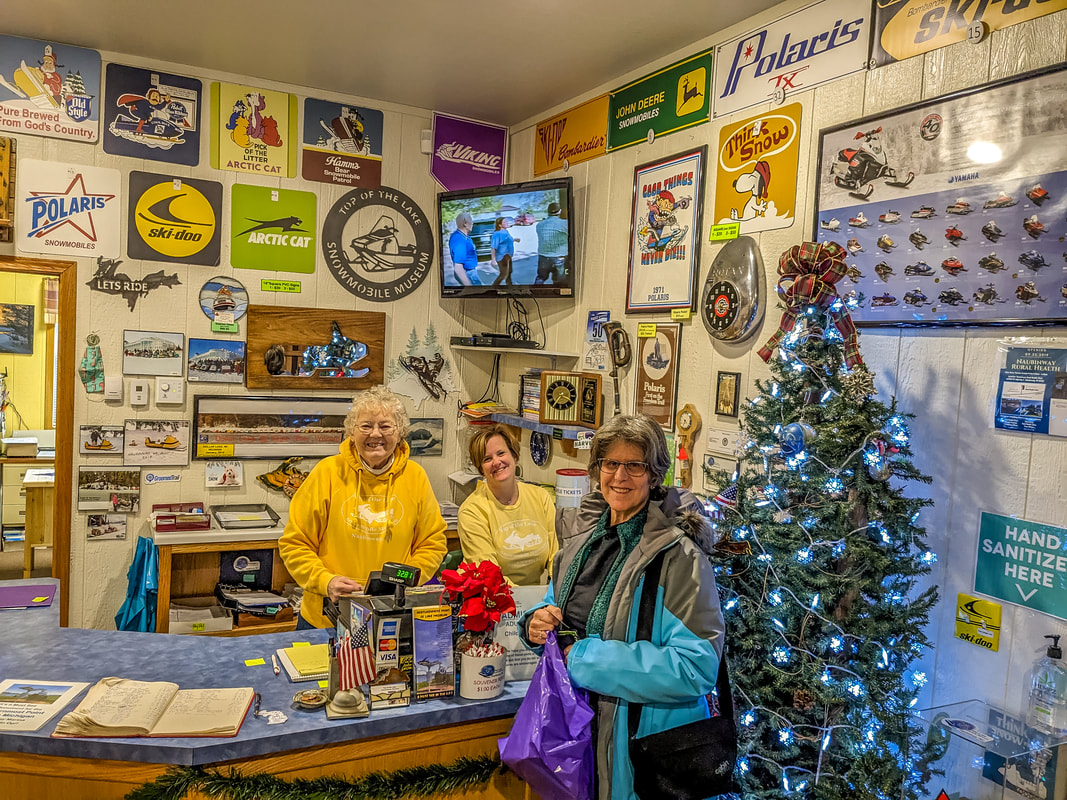 Laurie buying souvenirs at the museum!

They have rallies and such for antique snowmobiles.  They ride and show off old survivor sleds as well as antique sleds that have been restored.  It looks like a LOT of fun and all the details are on the museum website at www.snowmobilemuseum.com.  If you're up this way you simply must stop....snowmobiler or not.
We chatted with the folks at the desk and bought souvenirs, which support the museum.  Like everyone we've met in Michigan, they are very friendly and unfailingly nice.  We told them about our trip and that we're headed to Montana to snowmobile at Yellowstone.  We've added them to the blog mailing list so they can follow our Yellowstone trip as Yellowstone is a bucket list place for snowmobilers.  This was the coolest thing we did today! 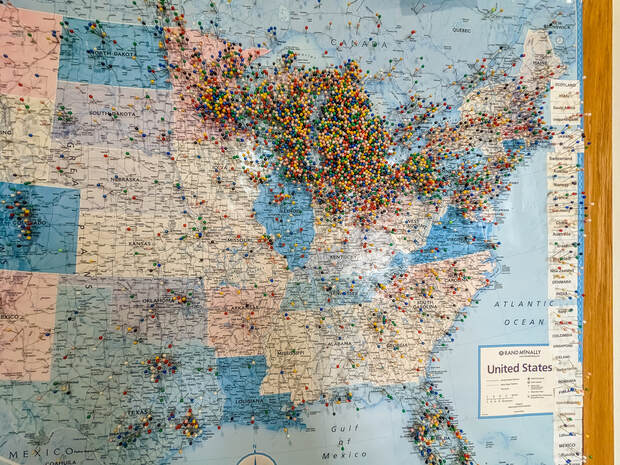 They ask you to put a pin in the map showing home.  There's one pin in Cookeville, TN.  And I put it there.

There are stands all over selling "pasties" (pronounced pass-tees).  But all the stands cater to the tourists and aren't open.  We've had these in the UK and it turns out the miners brought these over from England when they migrated to work in the Michigan iron mines.  We've had pasties in the UK where they're common.  They are a quick and tasty lunch, though these are just a tiny bit different.
The UK ones have a very hard crust around the edge so a miner with dirty hands could hold the crust and not get their lunch dirty.  The crusts were then thrown away or fed to the mine rats.  The Michigan ones don't have the perimeter crust but are otherwise similar.  They are full of potatoes, beef, pork, rutabagas, carrots, etc.
We were driving through a small town on the Lake Superior shore called Munising, in the middle of the iron mine region.  A lit open sign beckoned us as we drove by "Miner's Pasty and Ice Cream", the first one we have seen open.  We actually turned around and drove back to get one.....and of course it was great!  It was also our dinner as they are more than a little filling! 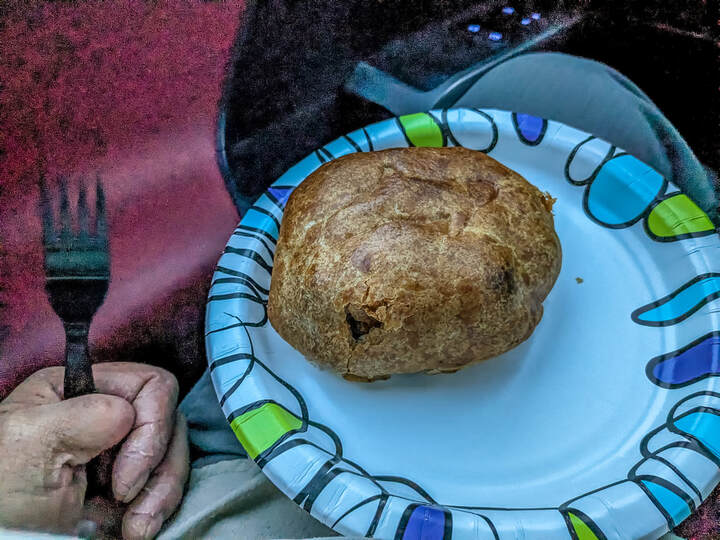 The dry winter air is giving Laurie a few problems with her dry eyes, and it bothers her.  We brought two small humidifiers but may wind up buying another along the way.  She has a lot of remedies, drops, etc. that she uses but sometimes just sitting with her eyes closed helps the most.  The dry air impacts my skin as well.  It's okay to visit colder climates.....we met and lived in Maine.....but living in colder places might be too difficult for us now. 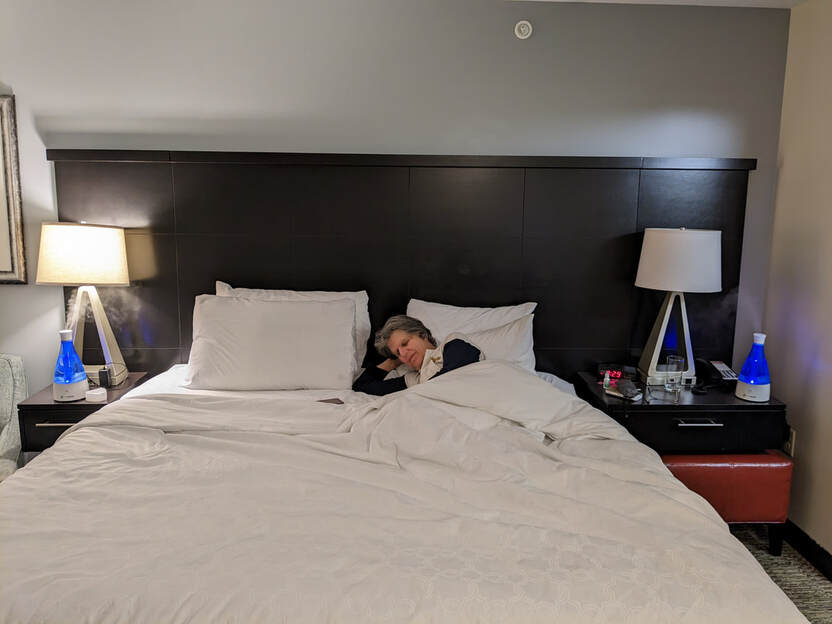 Two humidifiers...and it may not be enough

We head towards Marquette, Michigan where we will spend the night.  I drive across the remote areas of central Michigan, chatting with my wife.  I feel so lucky that I'm able to do this.  I remember what we were dealing with this time last year, what we were carrying.  I remember the weight of everything and not knowing what would come.  I am glad we are here.  I am happy.


I am immersed in the moment...taking it all in...and enjoying the trip with the one I love dearly.  The ride  was easy, it was simple, it was nice.  It was a moment that while unremarkable to others, left a mark on me.  I will remember it forever.  These are the times I am reminded how lucky I am and how blessed I am to have her.

​It was a good day.
Conversation while driving today.  We were on the upper peninsula of Michigan and cell service was non-existent.  I was playing music on my phone and a Doobie Brothers song was playing (South City Midnight Lady, one of my favorites).

Bill:  Did you know they're still touring?  And they still sound great.
Laurie:  Well, they always struck me as a bit more wholesome than other bands.
Bill:  Wholesome?!?  They are named after a marijuana cigarette.
Laurie:  But they were more wholesome than a lot of others from that time.
​Bill: Yeah......I guess if they were the Heroin Brothers they wouldn't have made it this far.