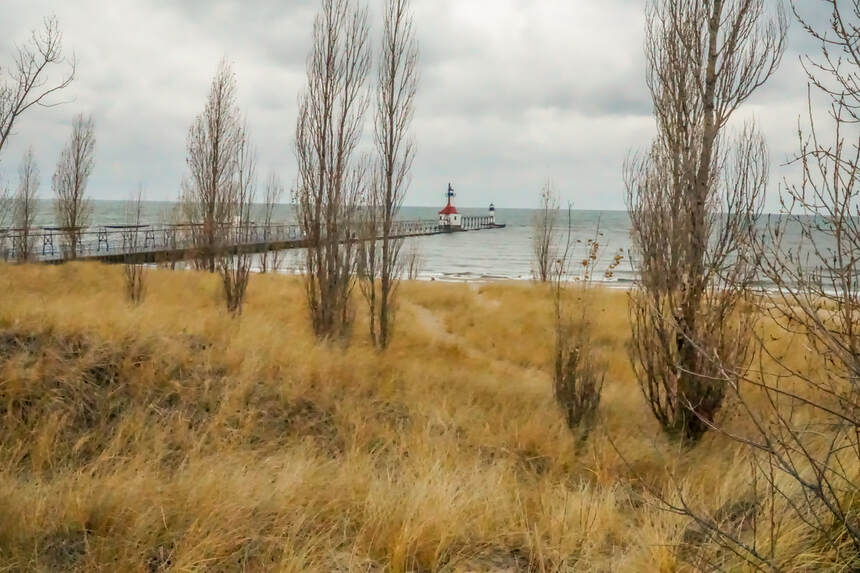 Originally published 12/22/2022
While I have been writing daily, today is my day off.  I am a spontaneous writer, able to sit down and write at will.  Laurie is a more pensive writer and lets her thoughts form over time.  I've been including her photos on the daily posts, but today is her day.  She's put together several days of thoughts and I'm using her photos. We'll make up a name for it....like some contrived Hollywood couple name.......maybe "Lauriday"?  Do give it a read.  She has a lot to say.
​
​I hand it off to Laurie. 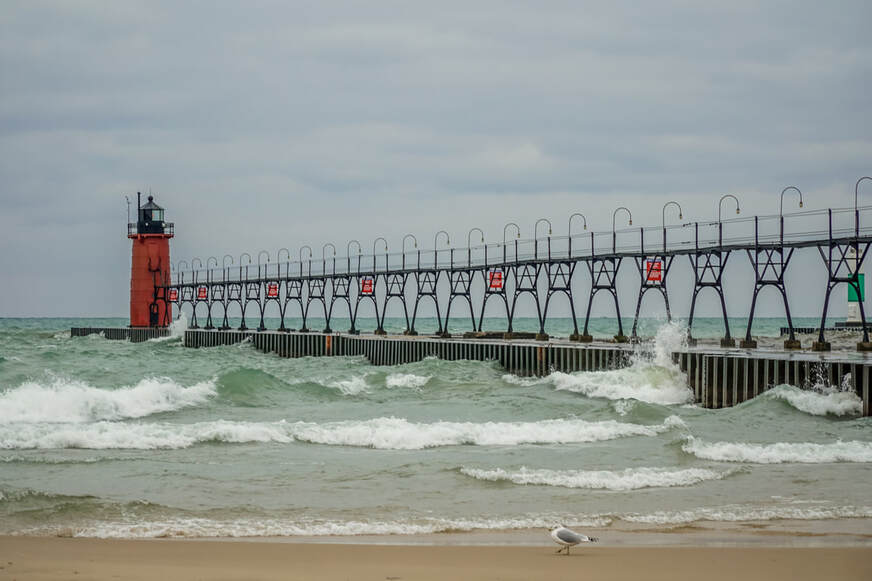 A friend called us Storm Evaders which seems to describe the first part of our vacation pretty well. When I told people of our plans for this trip the reactions ranged from ‘you’re crazy, ‘good luck’ to ‘that sounds awesome’.

We left TN in the midst of a bad rain storm and the weather has been messing with us ever since. It is what it is, you can’t change the weather. But this trip has made it clear that no matter how much one plans, mother nature wins. It has been a long time since I have had to deal with the reality of real winter weather. Montreal was the coldest place I’ve ever lived. Now I can say I have been to colder places. 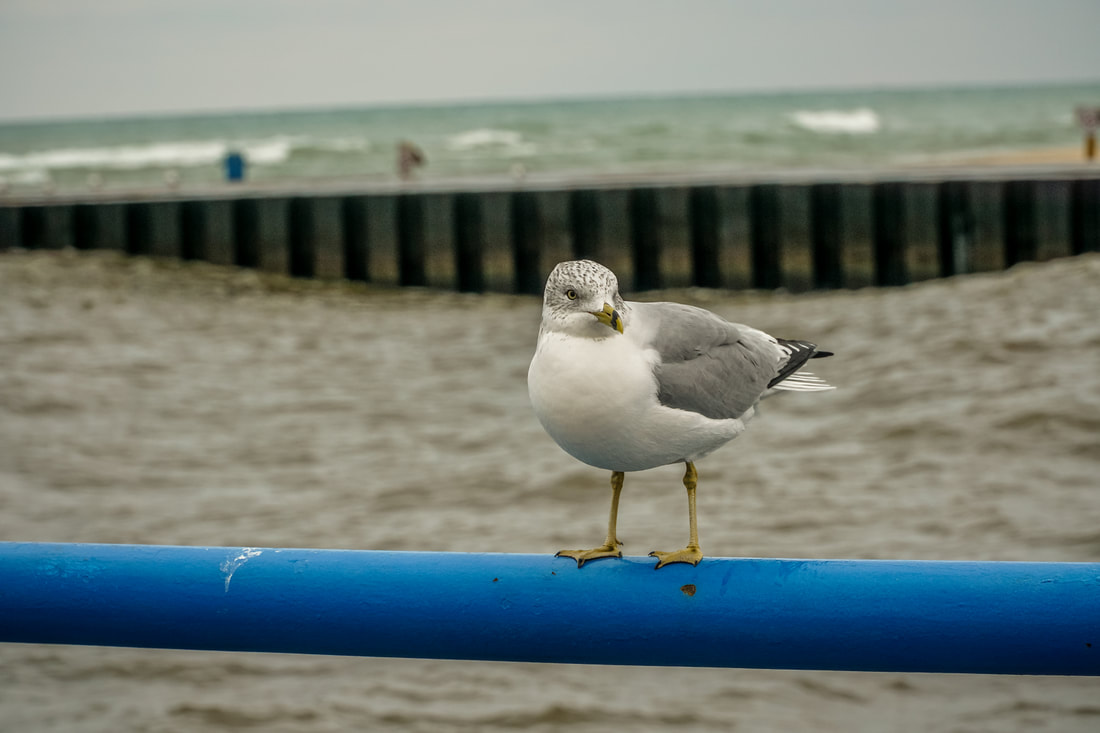 A fellow traveler along the way-Michigan

Starting in Michigan and continuing until we arrived at our destination of West Yellowstone snow, wind and bitter cold have relentlessly been pushing us forward. It is humbling to remember that in the end, we have to give the natural world the respect it is due. And thank you to those who have invented the technology that allowed us to avoid any disasters. I also have a great deal of respect for those intrepid souls who ventured to these godforsaken places hundreds of years ago, and the Native Americans who figured out how to live in these harsh lands. 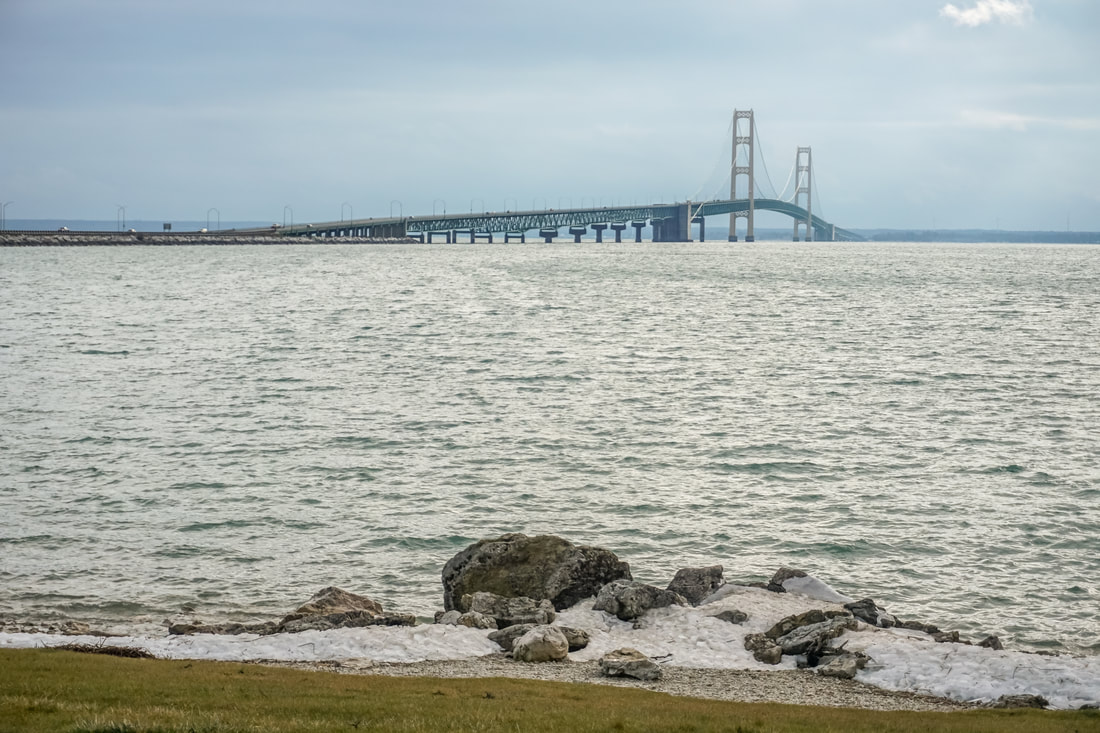 It would have been nice to see more of the lighthouses, the Enchanted Highway and Theodore Roosevelt park but I am glad to be safe and snug in our condo now. After seeing 3 semis and about 6 cars laying on their sides or buried in snow on the last stretch into W Yellowstone, it was a relief to get here. And to stop moving. 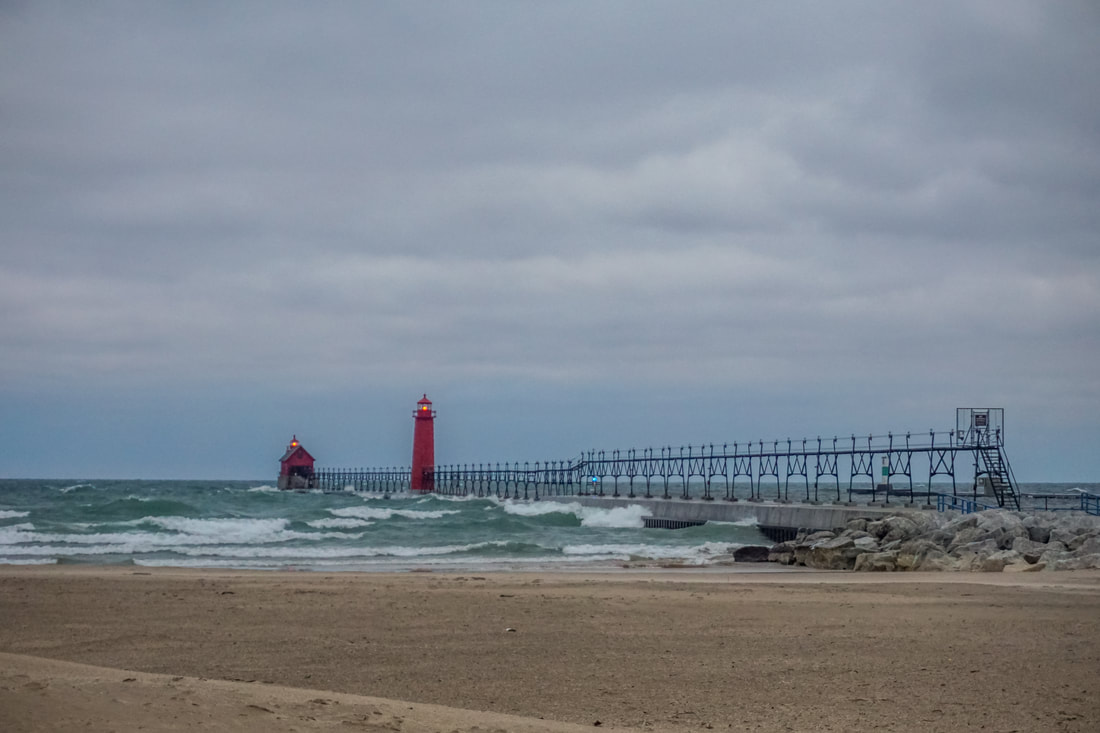 Michigan is a beautiful state. The Great Lakes are amazing. I now see the appeal of Michigan and could spend extended time by the shores of these mini oceans. The lighthouses are not as majestic as those on the Atlantic coast. But they have their own appeal as they bravely stand at the end of their jetties and endure the harsh winter winds and waves. These sentinels of safety have been guiding ships into harbors for centuries. I can imagine being out in the water in bad weather, the relief of seeing their beacons of refuge. Keepers have been replaced by automated lights but the ambiance remains.

The moods of the lakes was very much like the ocean. I have only seen the lakes from the developed shores of cities like Toronto and Chicago,  so the large sandy beaches surprised me. The only thing I missed was the salt smell. Some of the towns lining the shores were simple without a lot of touristy stuff, real bars and evidence of community life. Others were the homogenous gentrified waterfront towns that offer the same kind of experience from Myrtle Beach to Kennebunkport. 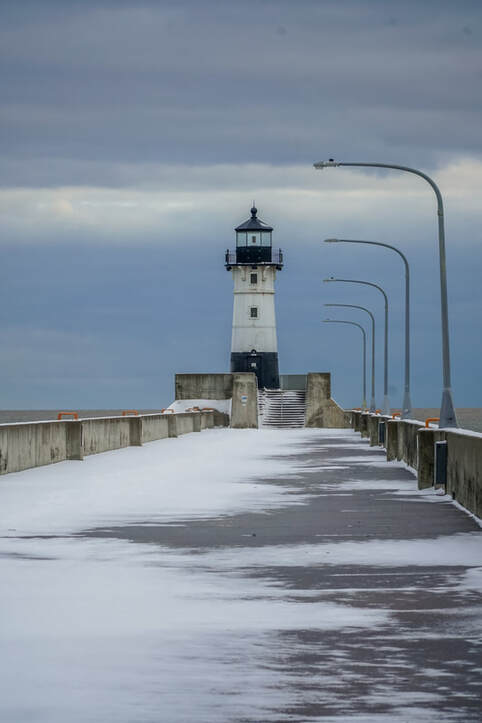 The Upper Peninsula is remote and the people who live there year round were very friendly and exhibited a quiet pride in their year round hardiness. Not much was open and most of the houses were closed up for the winter, but we didn’t have any trouble finding gas or food. I’m sure there is more of a community life in some of the towns than was readily evident from just driving through them.

Wisconsin was a lot like the UP but without the big lakes. Lots of smaller lakes and again, remote with little towns mostly shut down for the winter.Tourism is pretty heavy in the warmer months up there. As things shut down during the winter months, service workers may not have much choice but to head to warmer climes to work. 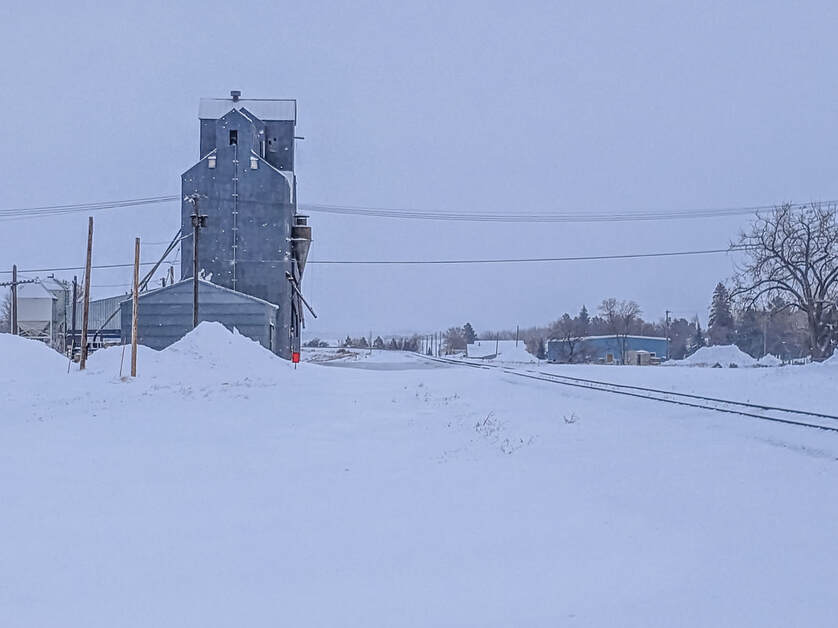 It is much flatter there than I thought it would be. In Michigan many of the pine forests appeared dead probably due to pine beetles. Wisconsin, however, had swaths of firs with heavy snow on them making them look like some kind of Ent, or friends of a Yeti. I half expected them to lumber forward and block our way.

Bill wanted to see the big ships come into port in Duluth but the schedule of comings and goings didn’t jive with when we had to leave to get ahead of the weather again. The port is very active and it would have been interesting to see one come in or leave. The city has a very vital downtown with a mix of posh hotels and simpler bars and restaurants. We had stopped outside the Sheraton to figure out where the pizza place was, and a lady asked us if we were looking for ‘the wedding’. They were all dolled up and I was wearing sweatpants and Bill his usual cargo pants. I didn’t want to be rude but really - did we look like we were dressed for a wedding? 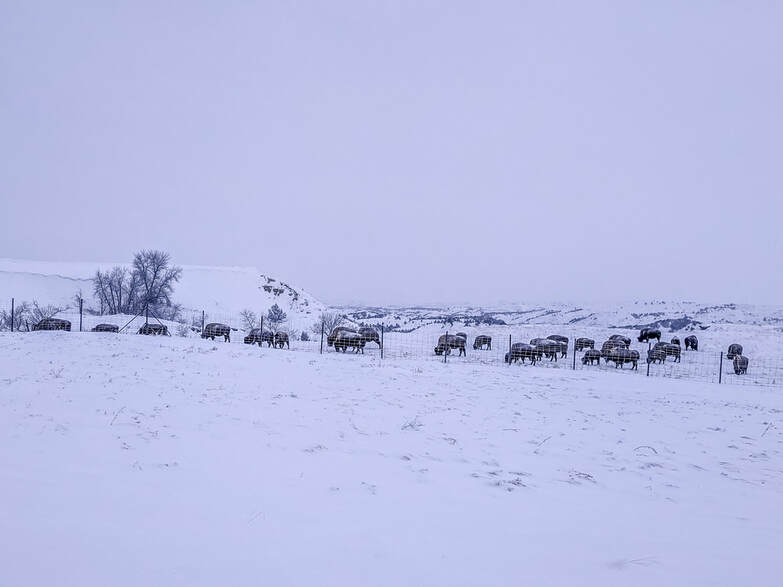 On from Duluth we crossed Minnesota and into N Dakota. Fargo was much smaller than I thought it would be.’ Fargo’, the movie, will forever color my impression of this place. The land gets flatter through Minnesota, and there is nothing in N Dakota for miles. It is several hundred miles between cities, with windswept plains stretching to the horizon.  I am a nervous winter traveler and was glad we were avoiding a blizzard.  It was evident that once the wind picks up, there is nothing to stop it.Isolated stands of trees provide the only vertical imagery. But these areas have their own beauty, like an alien landscape.
​
Given such desolation it also does not surprise me that many of the early settlers went crazy from the wide open spaces. Diane Ford, a comedian, says that the early settlers of Minnesota  left Scandinavia and traveled halfway across the world to find and settle in a place that was just as miserable as the one they left. 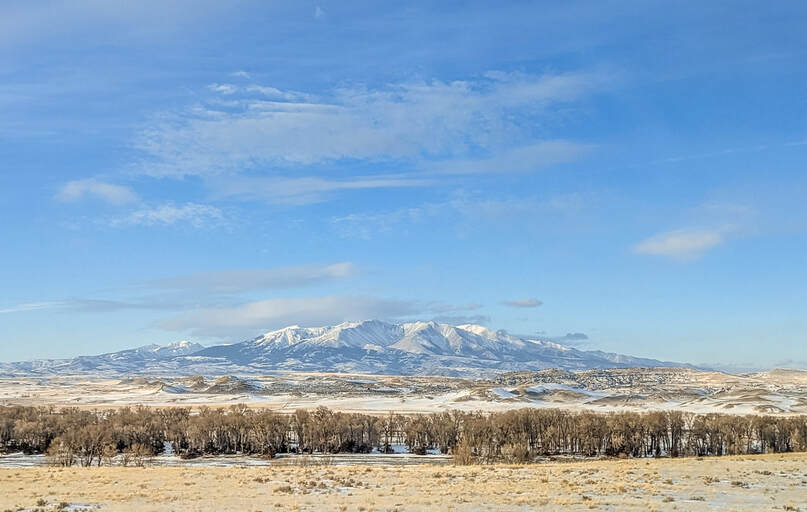 Bismarck to Bozeman was a LONG drive. We have said before that people from Europe have no concept of how vast this country is. I am not a big fan of 8+ hours in the car but we were, once again, pushed by the weather. Along the way we passed through Billings. Our local ENT, Dr. Kriskovitch, is from there and assured us there are nice places in Billings. However, the view from the highway is of oil refineries and industrial enterprises. Oil wells dot the countryside and it is not one of the more scenic places we passed through.

As I said, I am a nervous winter traveler. Having grown up in New England I understand the dangers of poor road conditions. I trust Bill’s driving, it’s everyone else that makes me nervous.  Remnants of the previous winter storms  were still present on the roads from Billings to Bozeman. The side roads were plowed but still covered in snow and ice. 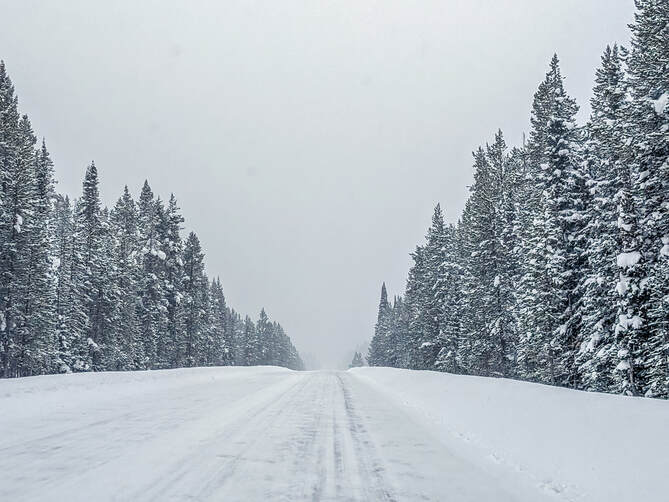 I will say  they are very efficient in clearing the roads. Much more diligent than Maine ever was.  We didn’t take the time to stop at the places we had planned like Theodore Roosevelt park and The Enchanted Highway. That was a bit disappointing but both would have required several hours driving on less maintained roads, and ‘they’ were still promising snowmageddon to descend on West Yellowstone the next day. Traveling always requires some fluidity within the structured plan.

We did our grocery shopping at Walmart in Bozeman when we got there. The Walmart had ONE person checking out. All the rest of the checkouts were self checkouts. Lines were still long and it seemed everyone in Bozeman was there. I asked the woman behind me if it was always like this and she said it was. Apparently it is very expensive to live there now and the entire service industry can’t find people. Wages have not caught up with the cost of living.

People from California flocked to Bozeman because real estate was cheap during the pandemic and housing prices doubled and tripled in a year. Those people probably don’t have to work. A one bedroom apartment rents now for around $2300/month. Such a shame, and happening now in Cookeville and the area we live in. As tempting as it is, I will not get on my soap box here. 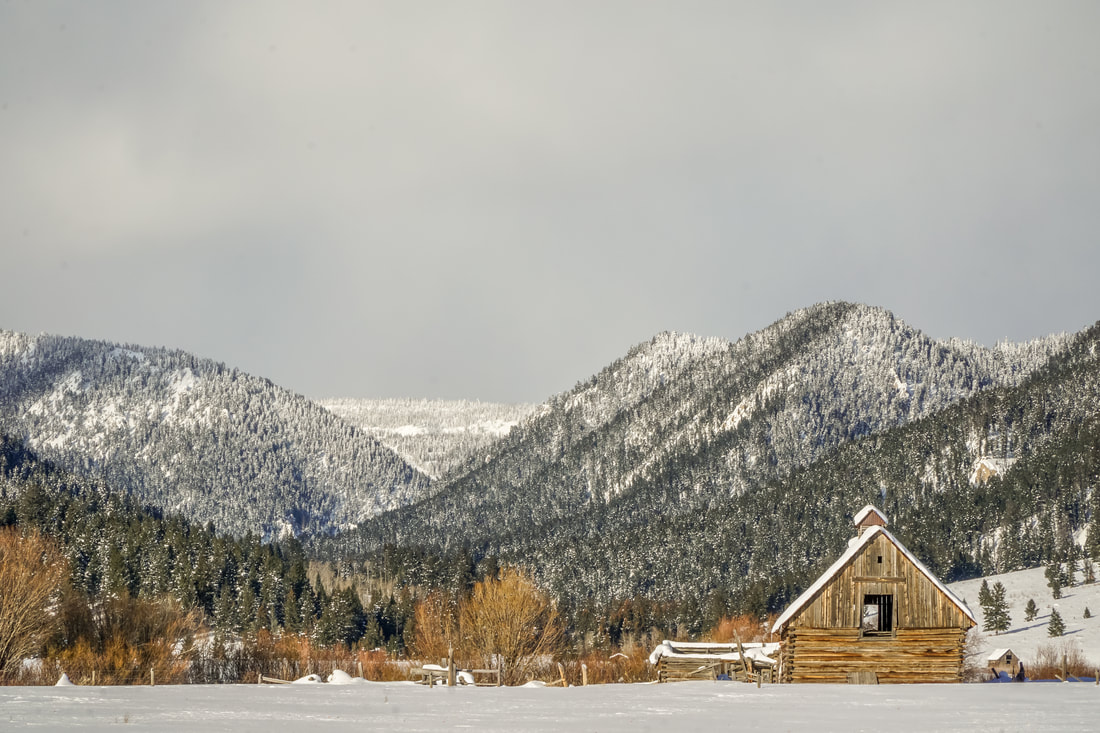 Outside of West Yellowstone, MT

Now we are settled in our condo in West Yellowstone. There is more open here than last year, probably due to the easing of COVID. Also we do not have to avoid everyone because of my health issues. There is a nice supermarket with good selections but a little expensive. My memory of the town from last year was colored by my anxiety about my future, so I remember it more as a dark and shuttered place.

The winter solstice has passed. Dark and light are briefly  in balance. It is officially winter now, having passed through the liminal season of autumn. Fall and winter are my favorite seasons. Winter is a season for hunkering down, drawing inward. Life has to continue on in places like we are in, but the pace clearly slows down.

Traveling this time of year presents challenges but it is, as always, an adventure. The past is behind us, and we can choose how to step into the present, and  what to take with us into the future.This year I can approach this trip with a lot of shit behind me, and face the future with less trepidation. Thank you Dr. Chandra for this gift. I am grateful.