BACK TO START
VISITING MAINE
2019

Day 3:   Old friends, and a quest for old foods
June 8, 2019
It has been a very easy going day.  No huge surprises, a little shopping, and a much slower pace.    We had a good day though, spending it with friends from the old days.

We woke up late this morning, in no hurry to get up.  Our schedule was  very vague and we were looking forward to just an easy day.  We headed north from Portland to Freeport, about 25 minutes away.  L.L. Bean is in Freeport and it's not a Maine visit unless you go to Bean's.    The second cool thing was that our friend Martha, from the old days of living in Portland, now lives in Freeport. 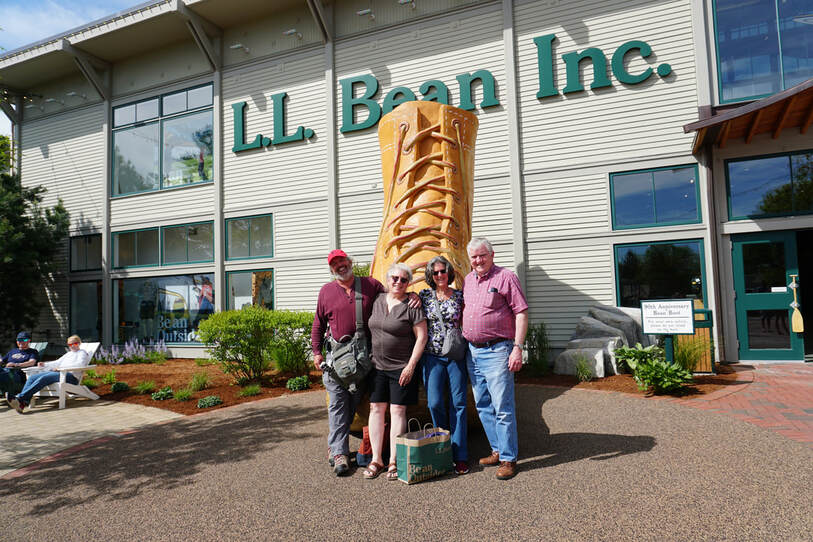 At the entrance to Bean's, the famous giant boot.  Bean's has employees stationed out front specifically to greet customers and take photos of them at the boot.
We meet Martha and her husband Jim  at their house, and after a bit of catching up around the kitchen table we head to lunch.  We have a very nice lunch at a brewery called "Gritty  McDuff's", and since I'm on vacation I break character and have a couple of beers.  The weather is just fantastic, and we have a great lunch on the deck outside.  You can't imagine how nice the weather is, low 70's, sunny, and clear.    The weather  folks have blessed us so far on this trip.

From there we head to  L.L. Bean for a bit of shopping.  In the old days, when we were MUCH younger, we'd do a middle of the night run to Bean's from Portland.  Bean's is open 24 hours a day, 7 days a week.   One of us would volunteer to be the designated driver (usually me), we would close out the bars (around 2 a.m.) and head to Bean's for middle of the night shopping!   ​
My best ever middle of the night was at a tent sale they were setting up in the parking lot for the next day.   I found a L.L. Bean fly rod where the label was peeling off and it was considered a "blemished" item.  They are NOT cheap, but this was was not considered perfect by Bean's.  I asked how much and the guy said "Twenty bucks".  I  immediately asked "how many of these do you have?  I'll take them all."  I scored two.  I still fish with one and my dad has the other.
​
This trip we did find some bargains in the  outlet store.  I bought a couple of pairs of L.L. Bean pants (60 percent off) and a pair of outdoor sandals (30 percent off).  Laurie bought a jacket, some sandals, and a travel toiletries bag.  She also checked out a new backpack for our Europe trips, but didn't buy today.
​The sales folks at Bean's are  incredibly knowledgeable and friendly.    They know and actually use the products they sell.  If the guy is fitting you for a backpack, you can pretty much bet that he is a backpacker.  The gun shop guys are shooters and hunters, and the kayak sales folks kayak.  This attention to detail, great guarantees, and actually knowing about the product they sell breeds a very loyal customer base.    Even after moving away, we continued to shop at Beans by phone and later by  internet.  They are top notch.

After Bean's, we went hiking in a local park that Martha and Jim go walking in every day.  We wandered through the woods and marshes, and eventually headed back to their house.  We bid them farewell with open invitations to visit us in Tennessee and headed back to Portland. 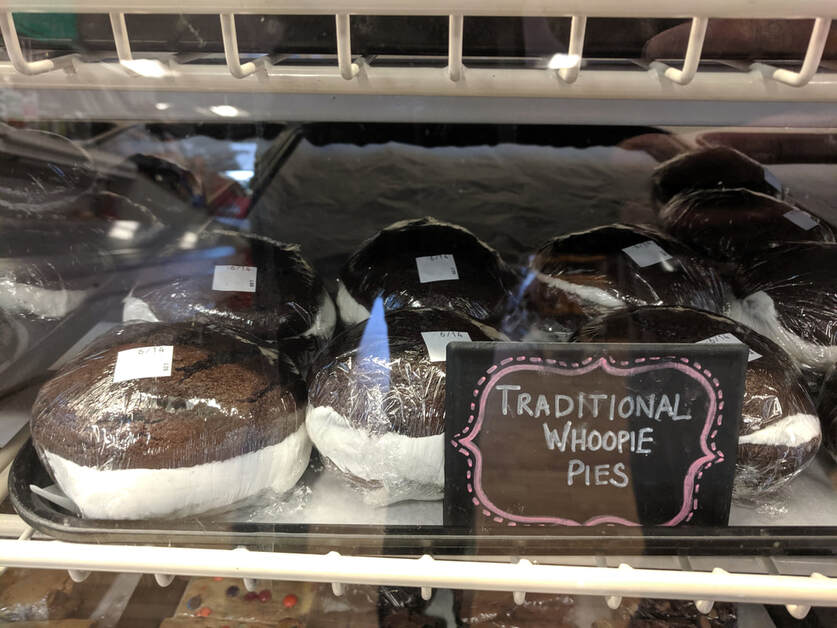 Whoopie pies are another Maine thing.  They are two chocolate cookies with cake icing in the middle.   They are basically a big disk full of diabetes.    This does not mean I don't like them, but for the record, I did pass on them today.
​When we travel, we love partaking in the local cuisine and  Maine is no exception.  There are two things we miss about Maine.  One of course is lobster, but the other is a local thing called an "Italian".  It is a sandwich made of ham, cheese, black olives, onions, green peppers, tomatoes, salt and pepper, and oil.  Good ones are on this gooey white bread bun that is just the right balance of chewy and soft.  The are incredibly tasty and we have never been able to find them outside of Maine.  Many say they have them, but they always come up short.

The secret to finding a good Italian is knowing where they  make them.   The best places are never advertised and you find out about them by word of mouth. The best places are usually mom and pop markets that have a deli counter.  Amato's is a local chain of pizza and sandwich shops that does a passable Italian, and it's okay as a fallback, but they just can't hold a candle to the little corner markets that make them. 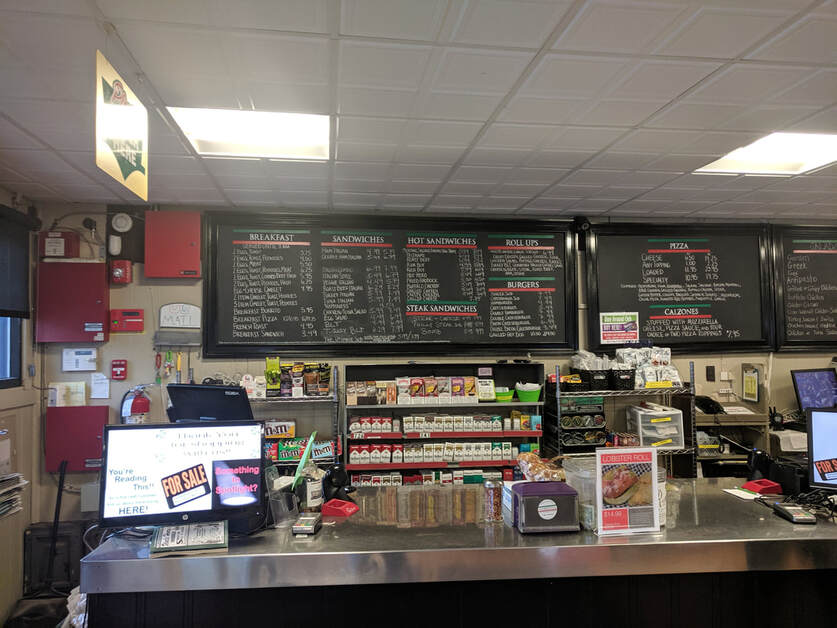 The three "S's".   Sandwiches,  Sodas, and Cigs.    Okay.....Cigs are a "c".    But it's close!  The menu is on the board.  You order and they fix it while you wait.
It's a problem in Portland now.    The city has gentrified so much that most of the mom and pop markets are gone.  In the old days you could get a good Italian on almost any corner, but these places have been replaced by sushi bars and hip coffee houses.   The city doesn't have the edge it used to and is very civilized now.

I stopped in a  place that advertised itself as a deli.  I will not mention the name  because I don't want anyone to know I was in the place.   I asked the girl behind the counter if they had Italians and she said they did not, but had other cold subs.  I asked her where  in Portland I could find a good Italian and she replied "Subway".  I  was so flabbergasted that I said "SERIOUSLY????"   I just turned around  and walked out.

Laurie said I was taking it personally but  I just couldn't believe that someone would refer me to SUBWAY!!!!  That should be a crime in not only this state....but most states.  It's the equivalent of asking someone where to find really good beef and being directed to Burger King.    Subway.  I'm still fuming.  ​ 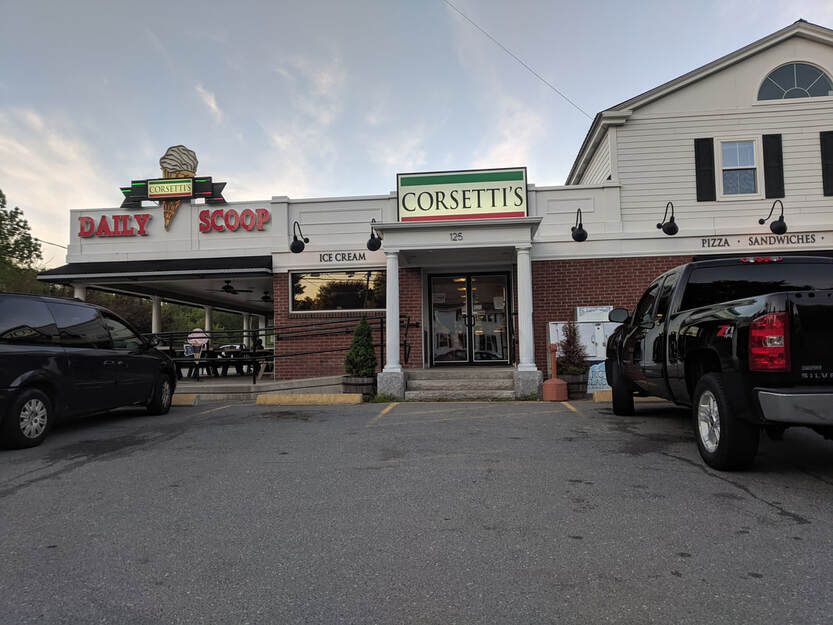 Corsetti's in Westbrook Maine!!!!!  It's still there!!!!!
​I have one last card to play in this game and I'm going to play it.  I know this place won't let me down.  I KNOW I'll find a decent sandwich place there.    I'm headed to Westbrook.

Westbrook is a mill town that abuts   Portland.  In the old days it was kind of gritty and it smelled horrible as the paper mill was there.    Westbrook was very blue collar, very working class.   The town has cleaned up considerably, and   granted the mill is a shadow of its former self.  The town no longer smells nasty......but there still has to be a decent  corner mom and pop place to get an Italian.    I'm taking a long shot but I'm going to try  a place I used to get sandwiches for lunch called Corsetti's. 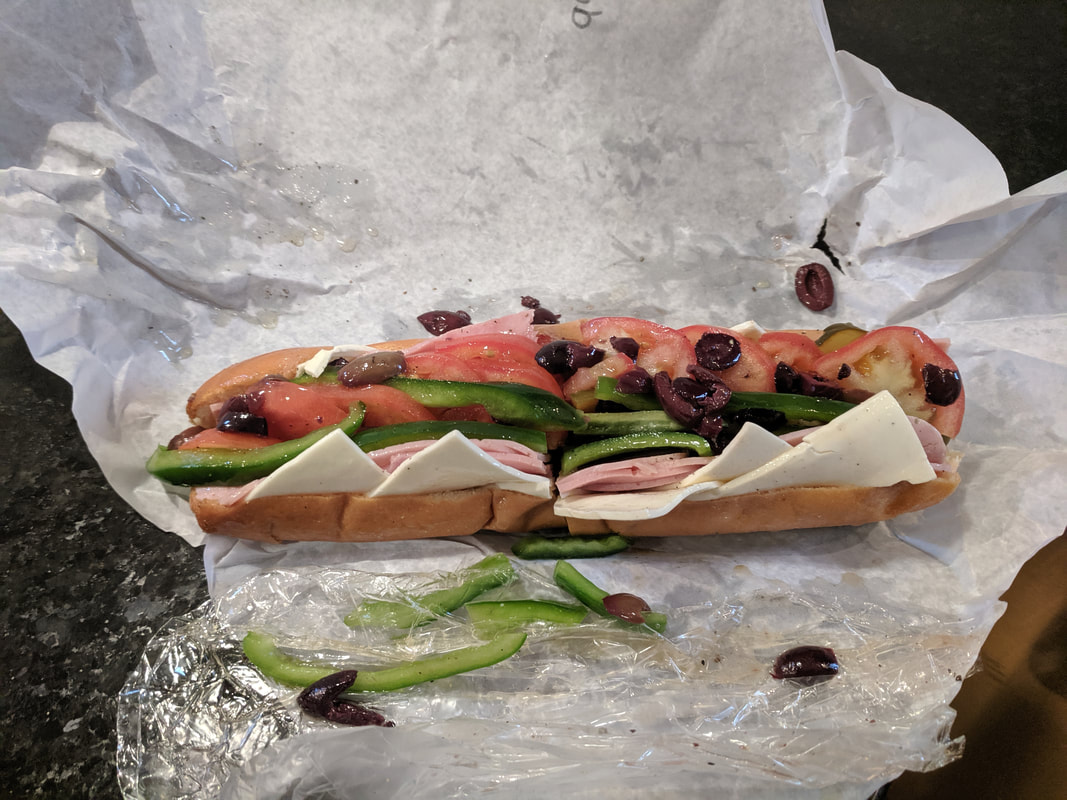 A straight up by the rules real Italian.  Soooooo good!
​We arrive to where Corsetti's was back in the day....and.............it's still there!!!!!!    We go in and find a bunch of old school Mainers churning out Italian after Italian from the deli counter.    I am so excited to find it's still around!  We're having Italians for dinner!

We order our sandwiches and I tell the woman at the counter that we cannot find decent Italians anywhere else we have ever been and that only place we can find them are in Maine.    She smiles and nods and says "yep!"  I tell her that we drove all the way out to Westbrook to get Italians  and I tell her about the girl that wanted to send me to Subway.  She shook her head and said "some people." 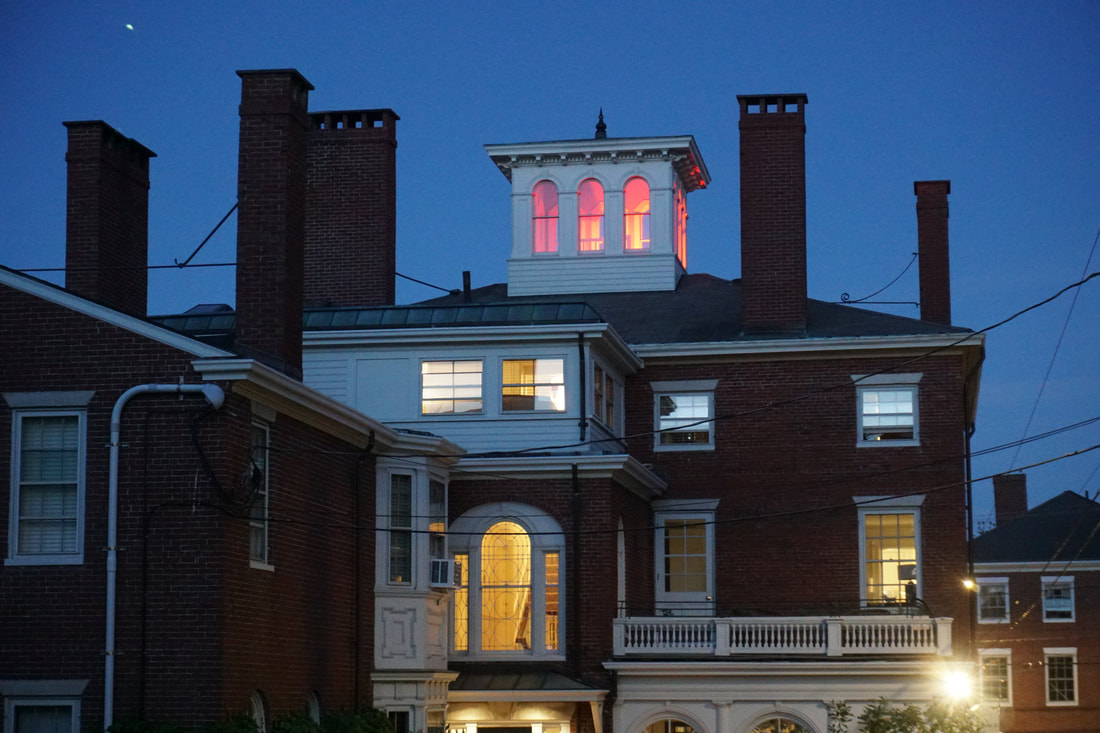 A "widow's watch", a common architectural feature in grand old coastal homes.  Just something I remember and took a photo of on our walk.
We headed back to the apartment with our treasure and had a wonderful dinner reminiscent of our younger days.    When we were out at the lake  we would walk through the woods to a corner market and buy them there.  When we were in Portland we could go to almost any corner market and get one.  Italians for dinner were like a time warp for us.....back to a time when we didn't have much but each other and it was a real treat to get them.

We finished out our day with a stroll through the old port and then headed back to get to bed.   It was a simple but quite enjoyable day.  Tomorrow......more adventures in Portland!

The Old Port is hopping on Saturday night.