Trip dates June 20-25, 2018
Day  one/we arrive in the city
When we reached the Howard's Beach station, we paid and we also bought our  Metrocard.  The Metrocard is your subway pass and when you  enter the subway station, you swipe it and it pays for your train ride.  We are going to be in the city for 5 days, so we get the unlimited rides for seven days ticket which costs $32 per person.  If you ride the subway around a dozen times, you've covered the cost.  I know we'll ride the subway many more times than that.
It turns out that Junior's is  more than a little famous.    We weren't aware of this but when people found out where we were by Facebook post or when we told them, we were always greeted with "that place is fantastic!"   And for the record, it was.  The food was great with bowels of pickles,  pickled cabbage,  and baskets of fresh rolls and cornbread brought to us  as we ordered.  I had ham and two eggs, which came with french fries.    I think the two eggs must have been ostrich eggs as the pile of eggs was enormous.

Laurie had a grilled cheese sandwich that was two inches thick, along with all the other trimmings and a glass of wine.    While this was probably a 2000 calorie meal minimum, it was so tasty!    We bought a few cookies for later from the on site bakery, and sadly had to pass on their famous cheesecake.  You can only eat so much at one sitting.    We are stuffed.

​We waddle off to bed in anticipation of our upcoming adventures.

We hang out with Maria and Bruce  for a while in their apartment, catching up  on what has happened in our lives since our last visit.    Bruce and  Maria travel extensively in Asia, an area we haven't yet visited.  We tell them about our  latest trip and they tell us about theirs.   It was great to see them again and we make plans for brunch and dinner on Saturday .  We head out  for our evening entertainment and take the subway down to Soho.
The stories must be true, and they must be the story teller's personal story.    They have to be real, and that  is the most compelling thing about The Moth.  You're getting a genuine story about someone's life.   Some stories are funny, others touching, and some are tragic.  No one ever knows what  the story will be until it is told on stage, in front of hundreds of people.   There were probably between  two and three hundred people  on hand. Maybe more.
We sat and listened to the stories told.  They are engaging and personal, and the people in attendance listen intently.  We sat through stories about the lack of technology after the hurricane in Puerto Rico and how it affected everyone's life, stories about how technology brought people together, and stories about online dating and subsequent marriages.  The stories were wonderful and we were  truly enjoying the evening.
As each storyteller left the stage, they or someone else would draw the name of the next storyteller.  We sat and listened through seven stories.  They drew out the name of storyteller number eight and read the name to the audience.  When the name was said, I  handed my camera bag to Laurie and said "I'll be right back".  I stood up and walked to the stage.
Laurie was totally unaware that not only had I brought her to The Moth, I had also prepared a story to tell.    Tonight, I stood on stage in New York City, in front of several hundred people, and told a story.  It was a good story, and it was greeted with much applause.  I was also the only storyteller that had the crowd stomping their feet.  I was honored to find my story so well received and so thoroughly enjoyed by the crowd.  Laurie was so surprised that she didn't even think to take a photo of me on stage.
I  finished second or third, being judged by a group of judges randomly assembled from the audience.    After the show I stood by the stage, talking and shaking hands with people who liked my story.    I was complimented by so many people  I lost count.  It was truly humbling to know my story struck a chord with so many people.    I try to tell good stories when I write the blog, and I'm happy to find that I'm able to tell good stories in person.  I don't know if they will use my story on the website, podcast, or one of the broadcasts, but if they do I'll try to  add a link to the blog later.  (Edit-  I have a copy of the video now.    Click here to  hear it.)
We  leave the venue and asked a group of college students who were at the show  if they lived in the area and could recommend a place for pizza.    They immediately begin complimenting me on my story and telling me how much they liked it.    Once again, I was humbled.    After chatting a bit they  told us where a great pizza place was.  We thanked them and we went to grab a slice.
We  walked a few blocks and found the pizza place, which had a line out  of the door.  While standing in line, we were recognized by another of the storytellers from tonight's event.  I told her that she told a good story  and I was once again humbled by her, telling me how wonderful my story was and how she connected with it.  We got  our slices and sat in a nearby doorway and enjoyed wonderful New York pizza.  It's been a hell of an evening......and we look forward to our next day.

Day  three/Meals with friends and strolling the riverfront

B and H had become a  massive store, 70k square foot in size .    Back in the day it was new and used cameras, now it is everything photgraphic and most things electronic.  While I browsed cameras and drones (I didn't buy either), Laurie went shopping for a set of Bluetooth earbuds.  She bought a great pair  which she is  very happy with.

​I got to put hands on  a couple of photo items I have been considering and  to actually look at  several of the drones I am interested in.  While shopping online is easy, actually picking it up and handling  it makes it a lot easier to make decisions.  While I didn't buy a drone, actually handling and looking at them made me change which one I intend to buy when  I do.
We leave  B and H with plans to meet Janet.  She is an editor at Reuters in NYC and she and her husband Lee were our next door neighbors in Wilmington, NC back in the 90's.    Lee used to sit on the front porch and enjoy a cigarette or two as Janet wouldn't let him smoke inside.  Heather would come over and talk with Lee as he smoked.  According to Lee he enjoyed the "stream of consciousness" unleashed by Heather.  These small conversations, according to Lee , were why they decided to have kids.
We watch the crowd in  Rudy's.  They encompass everyone from Fed Ex delivery guys to stock brokers, to NYU professors.  It is a real equal opportunity joint.    The booths are red leather, patched over the years with red duct tape.  At some point, it reached a tipping point and the booths are mostly duct tape now, with the occasional glimpse of red leather.  The patrons don't even seem to notice....or care for that matter.  We enjoy our beer in this NYC landmark  and  when finished we head toward the subway.
We  walk through Brooklyn, taking in the sights.  Brooklyn, in the area we are in, is very nice.  Rooftop bars, parks, nice condos and  and stores dot our path.  We head towards a restaurant called "Jack the Horse", a neighborhood place.  We wouldn't have known about  it had we not been meeting  locals  there for dinner! 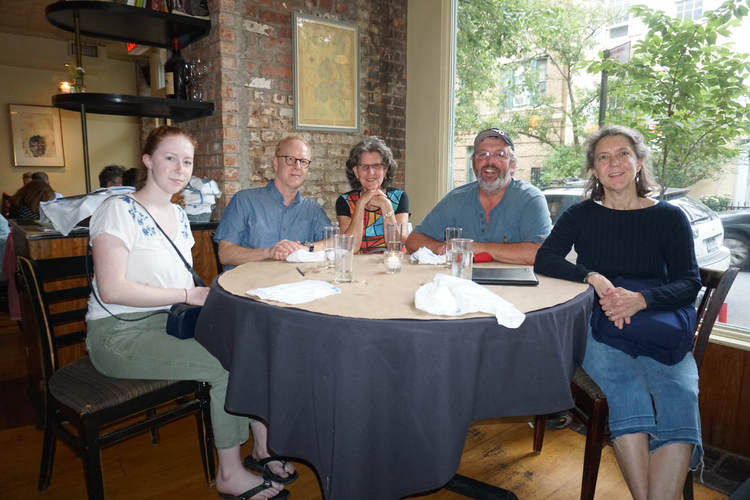 Dinner at Jack the Horse
​
We  meet a friend from Laurie's college days and his family.  Tim is an elementary school teacher in Brooklyn and he and his wife Susan and their daughter Lilly have lived  in Brooklyn a very long time.    As we talk during the evening, they tell us how Brooklyn has changed, cleaned up,  and evolved over the years.    As I've said in the past, I really like Brooklyn.  It's a "real" neighborhood and the people in it feel more connected to the neighborhoods than they do in Manhattan.  It just feels more genuine. 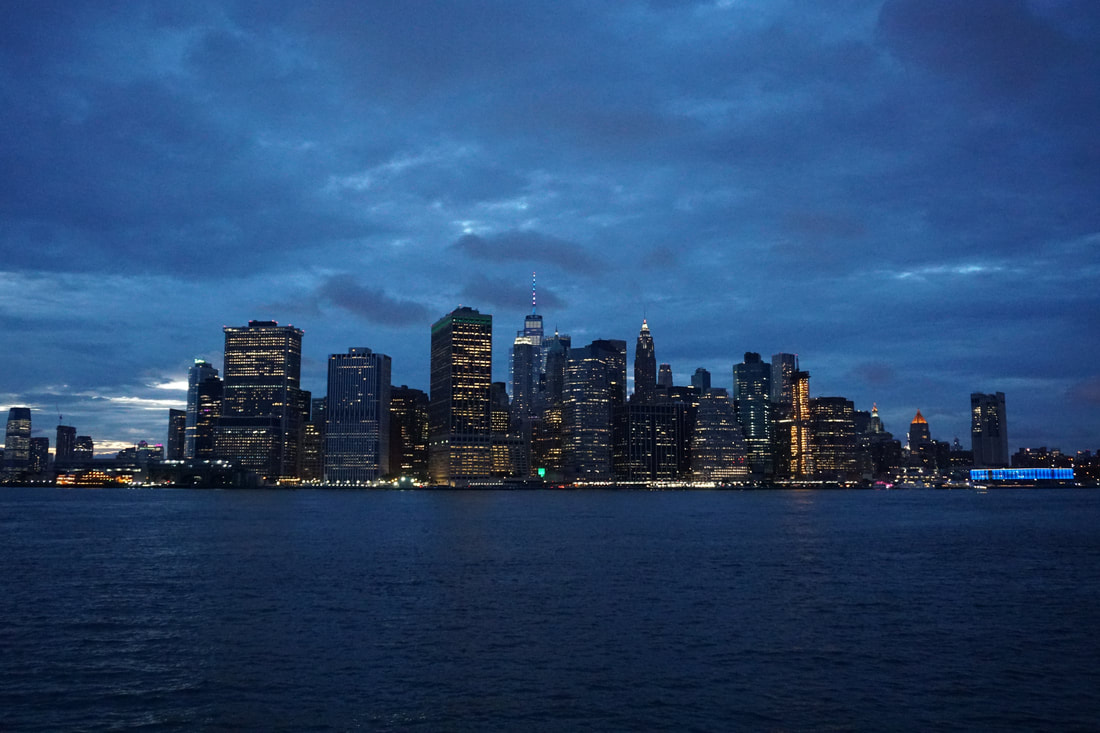 Manhattan at dusk, shot from the Brooklyn waterfront

One of the positives in writing about something days later is that you've had time to digest and reflect on your day and interactions.  In  retrospect, even without a visit to the site, Maria  bore witness in a much more intense manner than ours.  She was there.    It occurred all around her.  She sat and waited, to help those that never came.    She, like millions of others,  went on with their lives in a city  with a huge open wound.  There are few  ways to bear witness that are more intense than this.   She doesn't want to visit the site.....nor does she need to.    She bears witness on her own terms.......as does everyone else in New York City who was there. 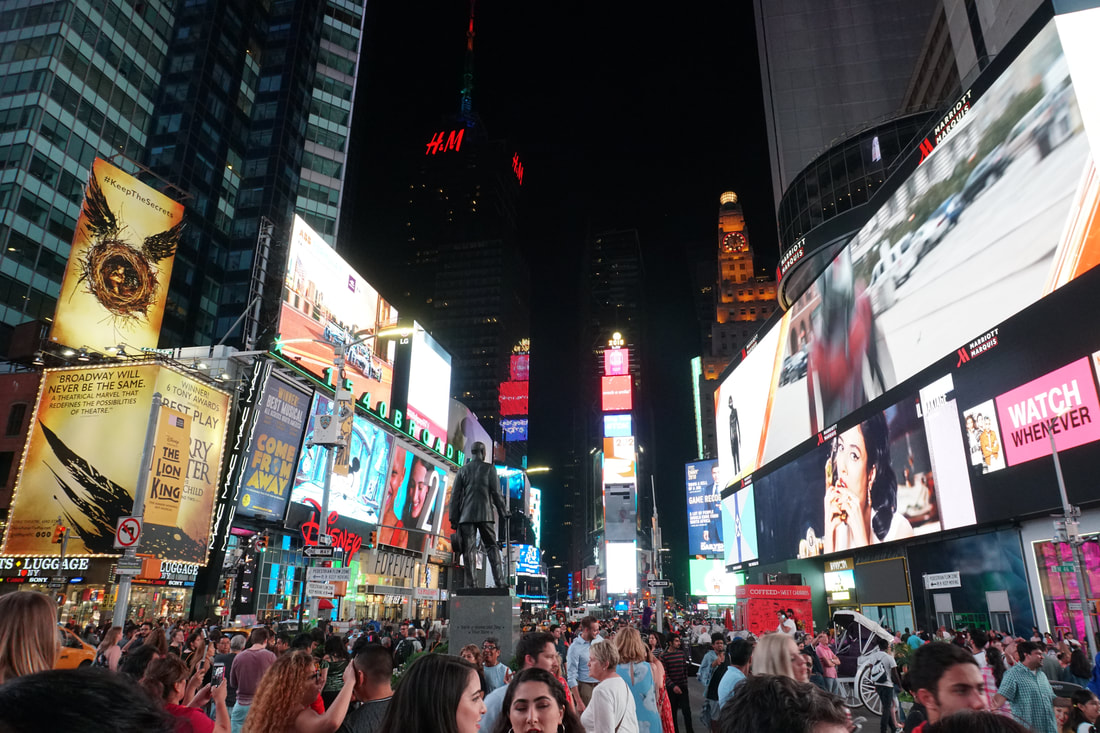 Times Square!!!
Yeah, it's touristy, yeah, it's crowded, even at midnight when this photo was taken.   I have the new camera and I wanted to see how it would do at night in Times Square.  Verdict is in and i think it's pretty good!   Times square had thousands of people there at Midnight.  It is so different than it used to be.  We get a few quick shots and get on the subway back to Brooklyn.

We take the  airport express bus to the airport.  We stop at the first terminal and a yound Indian couple board the bus.  We don't get off until the next terminal and we are chatting with them.  I asked them if they had just arrived in town and they had.  I pulled our  7 day metrocards out of my pocket and gave the cards to them.  I told them there were two days left on the card and they could have them.  They were quite appreciative.
We clear security and TSA precheck is a bit more crowded  than Nashville.  We have one last beer in the airport (at a scandalous ten dollars each) and board our plane home.  We arrive Nashville without problem.  The car parking people pick us up  and  shuttle us back  to our offsite parking   (www.executivetravelandparking.com).  As always, they have our car running, a receipt on the seat, and the a/c has been running so the car is cool in such hot weather.    I do so admire a  company that takes good care of their customers.  If you're flying out of Nashville and need a place to park, they're fantastic!

Our trip was great, with so many visits with friends , so much great food, and so many adventures.  If you 're thinking about going to NYC, just go.  It's safe, it's fun, and there is so much to do and see.     As always, it was so wonderful to share this adventure with Laurie.  She is my perfect travel companion and for me, there is no one I would rather venture out and see the world with.  It was her birthday and I'm happy she  had such a great time.

Until my next trip with my wonderful wife.........plan those trips, and if you have any questions, by all means ask me.    Thanks for reading and safe travels.