I have not had much time for quite a while.  Packing up the farm, downsizing, and moving have taken huge blocks of time.  While I usually can't wait to put together the blog on our trips, I've been so excited about doing nothing.  While I will be doing posts, they're a couple days behind.  And I may miss a day or two here and there, so it's different this time.  I hope you still find it interesting.  I hope you'll join us for our visit to Texas! 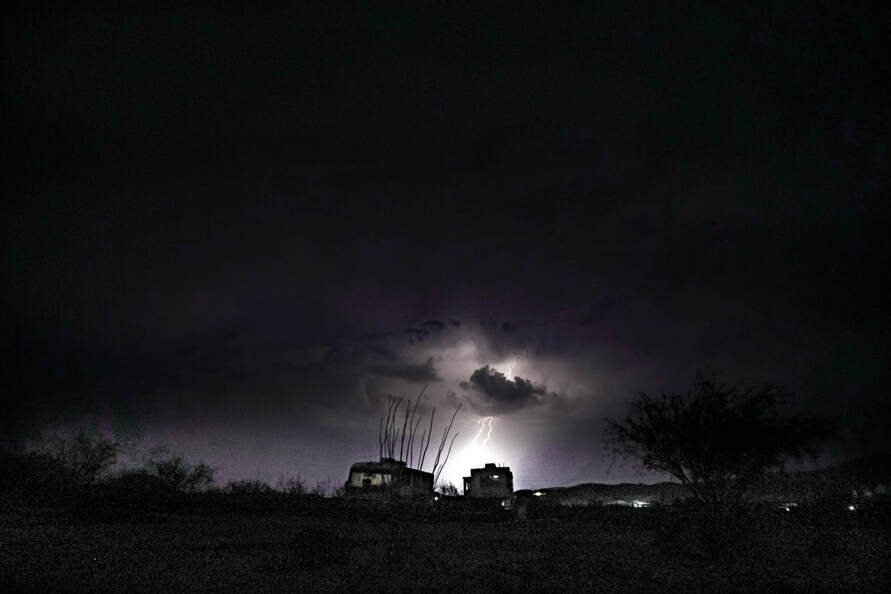 Lightning storm that skirted us
We sleep late the next morning, a luxury I have missed.  We set up our new griddle and find out we don’t have a metal spatula to use with it.  We decide we will drive 50 miles each way to Presidio, Texas to shop for a spatula.

We had planned to drive to Presidio one day anyway.  Some Texas highways are designated “FM”, meaning farm to market.  We head up FM 170 from Lajitas to Presidio.  The road is one of the most scenic in the state, with vistas, canyons, and fantastic views.  We take our time….we take photos….we go slowly and enjoy the journey.  While we say we went to shop for a spatula, the journey was what we sought.

We found our spatula at the Dollar General for three dollars!  We continue into Presidio and visit a panaderia (Mexican bakery), we get fuel, and we look for a place to have lunch.  We wind up at a place called “The Bean”, right on main street.  Lunch was excellent. 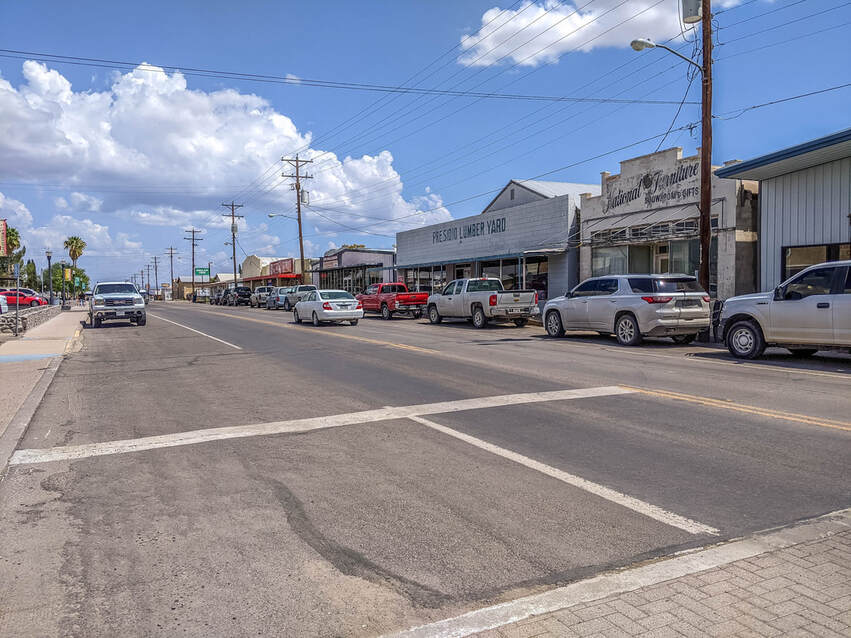 A sleepy little border town, Presidio, Texas
We miss being able to travel to Europe as COVID has made that very difficult.  I can recall so many times that I was sitting in a cafe eating a local specialty, very different from what I have at home.  I watch the people go by.  I listen to them converse in another language and go about their day.  It sinks in that I am really traveling...experiencing a different culture, food, and language.  I long to travel again.

I sit in “The Bean” in downtown Presidio, Texas enjoying genuine fajitas.  The music playing in the cafe is a lively Mexican song and all the songs I hear are in Spanish.  Most of the people converse in Spanish, switching to English when they run into someone like me.  I am eating different foods….in a different culture….with a different language.  The realization hits me that while I’m not in Europe…….I’m traveling again. 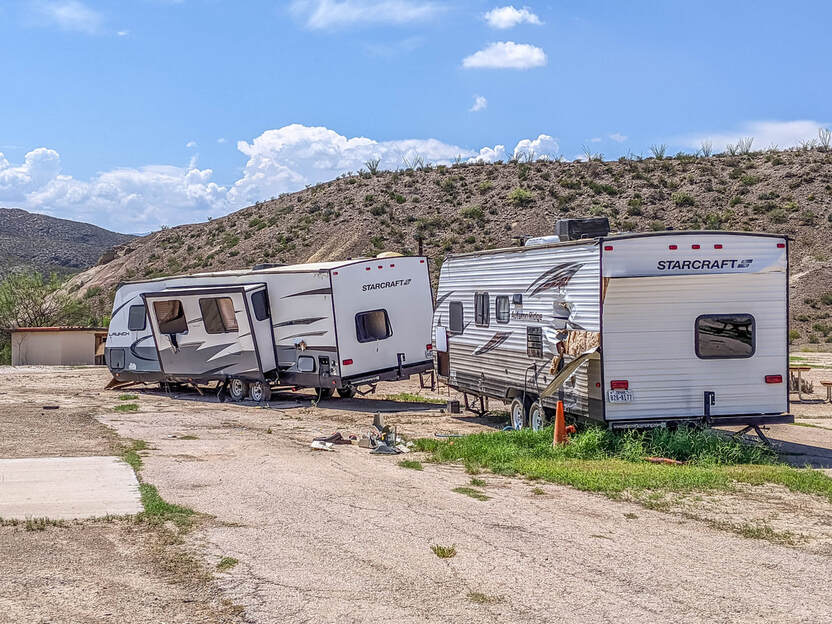 Storm damaged RV's at Lajitas
We finish lunch, and take a few photos of the bustling little border town before heading back to Lajitas.  We ride through the RV park and notice multiple campers that are heavily damaged.  We ask the office staff if this happened the night before during the storm.  While the storm was intense, we didn’t think it was that bad.  Damage to the campers was pretty bad (see photos).

We were told that all of the damage happened the night before we arrived…...the night we considered pushing on and getting there late at night.  The night we poked around and decided not to rush our travels and stayed in Midland.  That night.  We would have wound up on the remote 100 mile stretch of road in the open desert during winds of 110 mph.  It worked out for us. 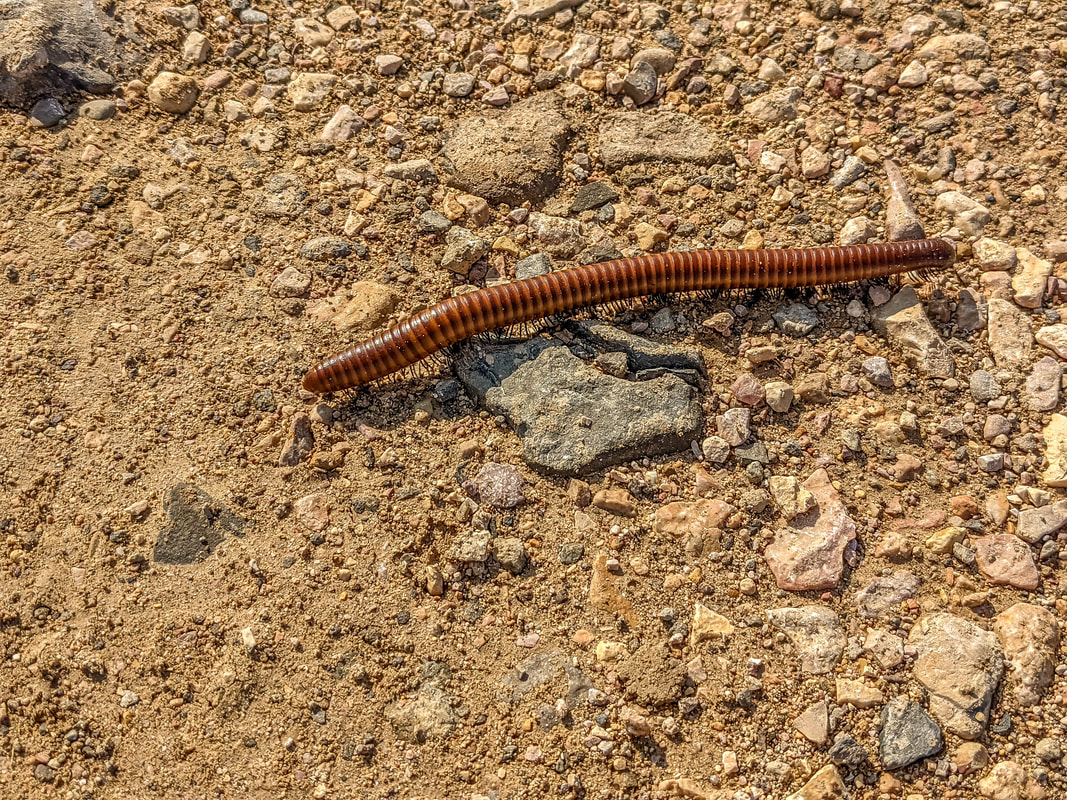 Laurie ran across this unpleasant looking 7 inch critter
I planned on shooting stars on night two, but storms were brewing again.  After seeing all the damage and riding a storm the day before, I planned to show the storm the proper amount of respect.  While the breeze kicked up, the storms skirted us.  They put on an incredibly intense light show, easily seen across the vast, open desert.  Star photos were out due to cloud cover.  So for the first time, I shot lightning...and it was way cool!

Day three at Lajitas, I had planned on writing a blog post.  As much as we’ve had on our plate, I planned on posting a couple of times and only when I felt like it.  I’ve been dealing with way too many deadlines lately and I didn’t need another one on vacation.  Laurie said “come to the pool with me for a while”....which I did. 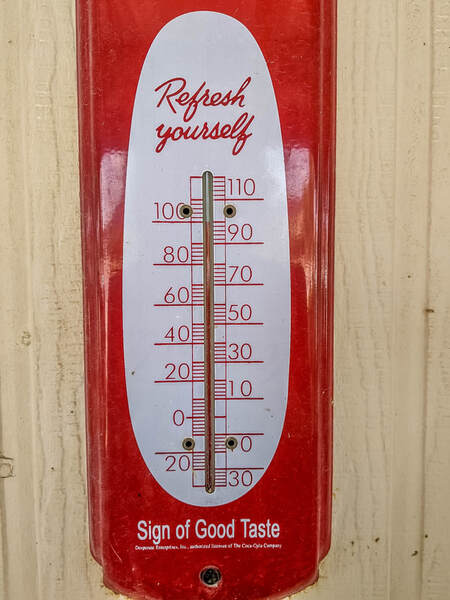 The weather channel said low 90's.  They were a bit off.

This hour turned into like…..five.  We puttered around a bit more doing a whole lot of nothing and enjoying it immensely.  We finished out the day with a cigar and a beer, sitting under the awning, looking at the landscape around us.  Before I knew it, the day had gotten away from me.  I had accomplished nothing that I planned and did not get a blog post written.  I procrastinated.  And it was good.

We met our neighbors early on in the weekend.  Juan and Jose are from Puerto Rico and now live in San Antonio.  They are retired from the U.S. Air Force and now work for civilian contractors.  They are traveling/working from the road and decided to spend the weekend in Lajitas.  Jose, his wife, and daughter have a RV nearly identical to Juan and his wife.   I enjoy meeting people when we travel and they are great guys. 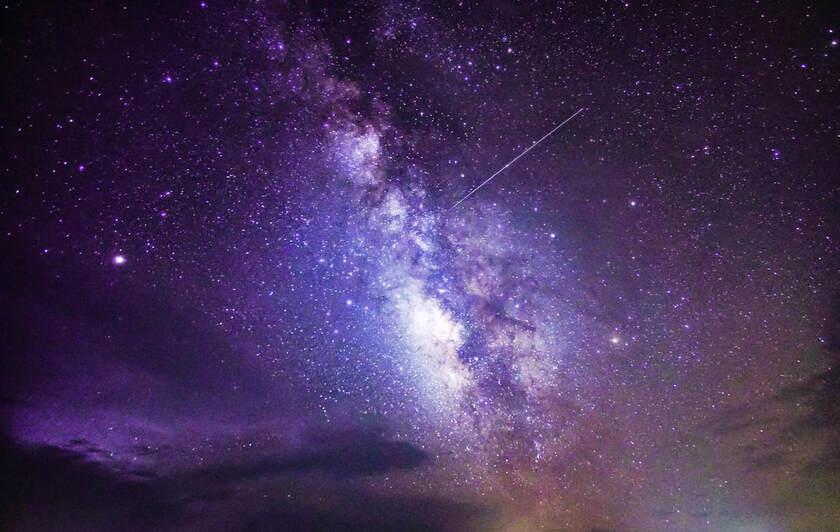 Shot right outside our camper

Juan and Jose knew that I did star photos and they were asking me questions.  As night fell, they asked where they should look to see the Milky Way.  I told them “look up”.  It is so dark here and the air so clear, it is nearly impossible to miss.  They quickly spotted it on their own.  The skies were incredibly clear and I took some fantastic star photos.

We’re on day….five I think.  We headed to Terlingua….because we could.  We weren’t sure what we would do...but we would do something.  Go to the store, get fuel, find lunch.  We’ll make a trip out of it. 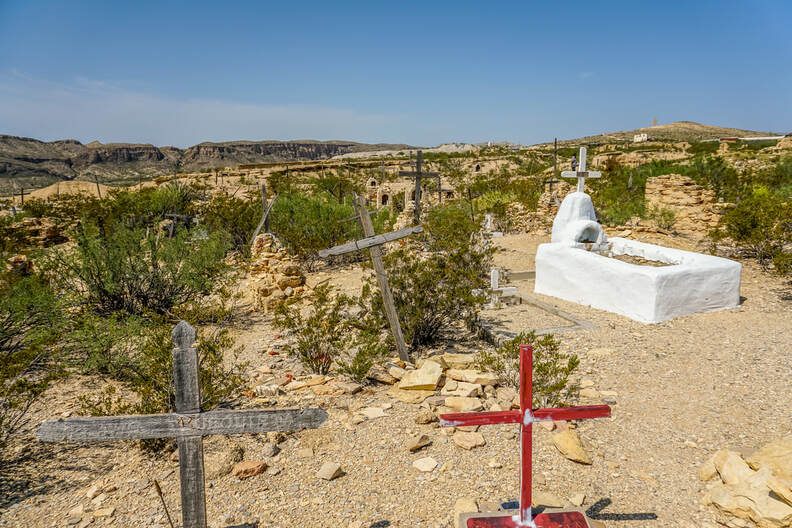 We wandered the cemetery in the Terlingua ghost town.  Graves are different here.  Lots of Mexican icons, it’s very rustic.  Weathered, roughly constructed wooden crosses mark many of the graves.  Personal mementos and remembrances are common on many of the graves.  If someone was well known it is not uncommon to have dozens of beer bottles.  Graves of children are decorated with toys and other personal remembrances.  These things are usually left by someone that knew them.

The sun and weather eventually break down many of the things left by the graves. The crosses split and crack from the sun and hot weather.  Monuments crumble.  The sun bleaches out flags left on graves.  Everything here is eventually reclaimed by the earth and returns to what it originally was.  I find it much more touching than manicured gardens and cold stone monuments.  It is how it should be. 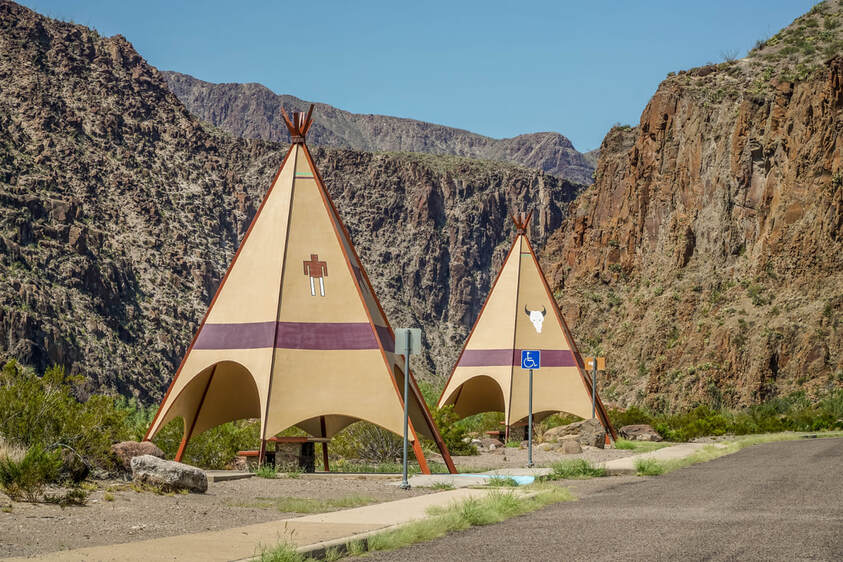 Picnic area on FM170 near us

We shop at the Terlingua General Store, buying souvenirs, cold drinks, and we both bought hats.  We head back towards Lajitas and get BBQ from a trailer on the side of the road in the middle of the desert.  It was good.

Laurie lounged around at the pool while I sat in the “clubhouse” by the pool and wrote 5 or 6 days worth of the blog.  Soon it’s a beer and a cigar.  Hopefully the skies will be clear tonight and the stars will put on their show.  Tomorrow we move about 120 miles to Marfa.  We visited Marfa around 7 or 8 years ago but look forward to returning.

More soon!  Be sure to look at the slide show below for ten more pics!