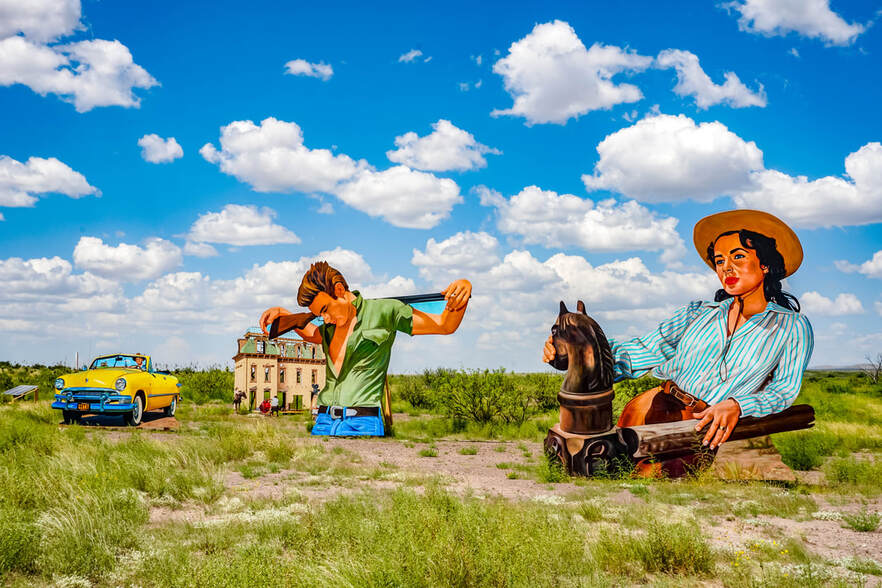 Murals in the middle of the desert from the movie "Giant"
We sleep late on our last day in Marfa.  I’ve grown used to sleeping late, not chasing deadlines, not being pushed.  We eat a leisurely breakfast and head to the coffee shop in town for our morning latte….another habit I’m enjoying.

After coffee we stop in Porter’s, the grocery store.  They’re a Texas chain, with stores mostly in small southwest towns.  If it’s too small a place for one of the big chains, Porter’s steps in to fill the void.  They’re not huge stores and the items they stock are tailored to the locality they’re in. 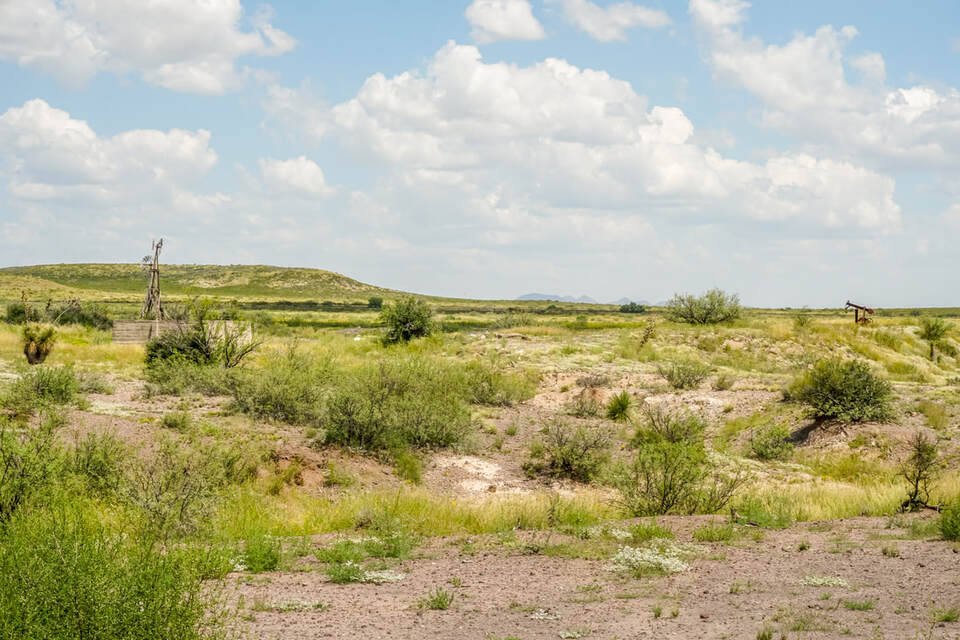 The actual set location of "Giant"
We go in for…..I don’t even remember what.  We walk the aisles, and wind up going for a cart.  Laurie loves Hatch green chilis and they have a huge selection of Hatch chili stuff.  We get sauces and sausages.  Laurie buys different kinds of Mexican teas and spices.  We stock up on treats to bring back to Tennessee…...and it was a nice visit.

We drive around, looking for photo opportunities.  We scout places to do photos when the stars come out.  We see flowers, animals, things that are different than where we live.  We visit a photographer’s studio and Laurie buys a print.  I drive through the Texas countryside with the one I love most.  My best days are spent with Laurie pursuing no particular destination. 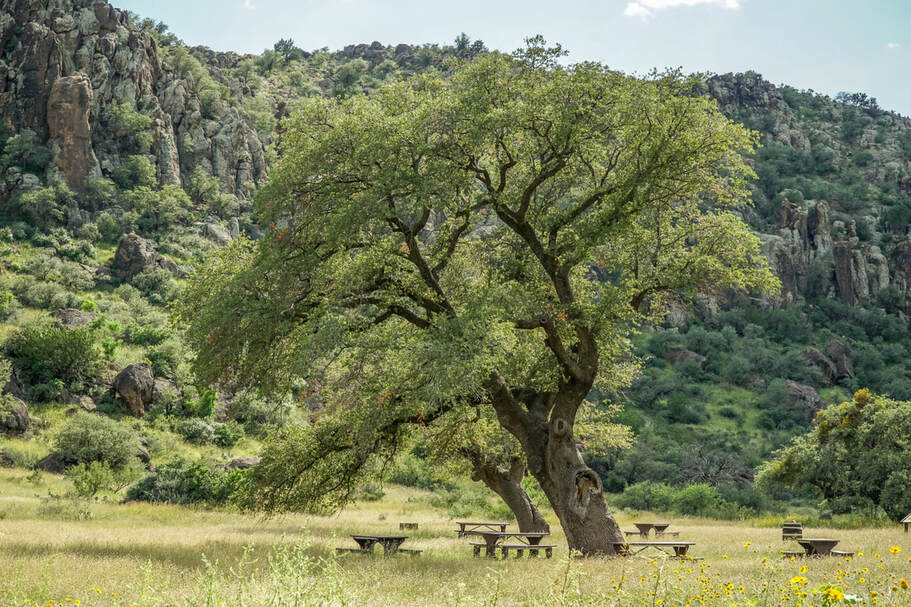 Old cottonwood trees at Fort Davis
We wind up where they shot the famous movie “Giant”, with Rock Hudson, Elizabeth Taylor, and James Dean.  It was James Dean’s last movie and released after his death.  Realize that the movie was shot 65 years ago and not much is left of the set, but an artist has made murals of scenes in the movie and erected them at the site, in the middle of the desert.

We get out to take photos, turns out they have music coming out of some fake rocks that plays when you walk up.  The murals and the set are behind a fence and it is posted so you can’t go kick about.  But you can view it from the pulloff at the side of the road.  We decide it gets a grade of “pretty cool”. 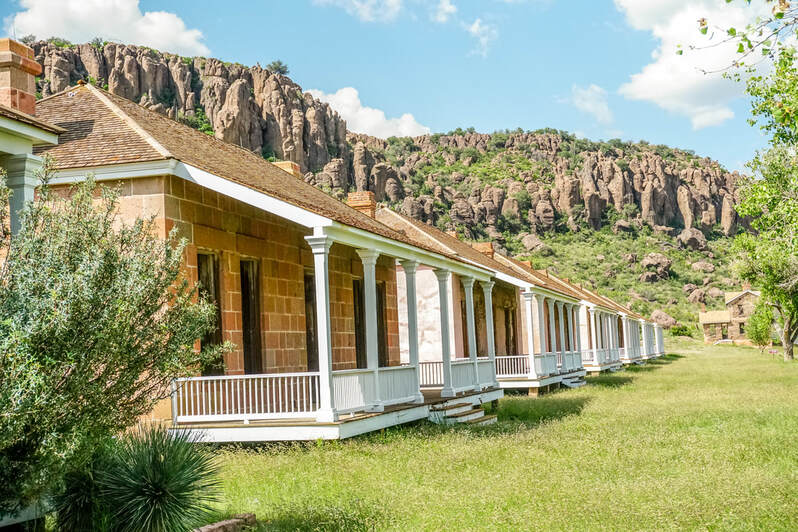 Fort Davis, Texas
On our way back into town, I see a spot I’d like to try to shoot the stars.  It’s a picnic area on the side of the highway.  Places like this are a lot safer to shoot from as you’re on pavement (fewer chances of snakes and such) and you’re not totally in the middle of nowhere.  We plan to shoot there tonight.

We head north to a town called Fort Davis, an old cavalry outpost from the 1800’s.  It’s now a national park, but it’s one of those that not a lot of people know about or visit.  That’s fine with us as crowds really aren’t our thing…..especially with the issues with Covid.  It is practically deserted. 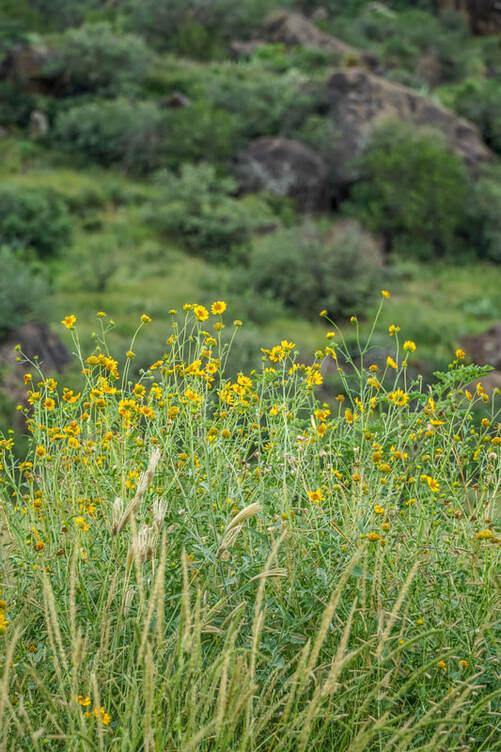 We walk the buildings, imagining what it was like to live here in the 1800’s and how difficult it must have been.  We read about soldiers, members of their family, their children, who were sick or injured.  It never seemed to end well and they died of maladies and injuries so easily cured or prevented with modern medicine and practices.  As we sit in Texas and watch Covid numbers skyrocket back in Tennessee, it makes me wonder.

We leave Fort Davis and decide to have dinner at a restaurant called “Para Llevar”.  We order at the counter and they bring our food to us in a courtyard with tables and chairs.  I had pizza and Laurie had a grilled cheese sandwich…..and they were truly excellent.  If you go to Marfa, this is the place to go for at least one meal. 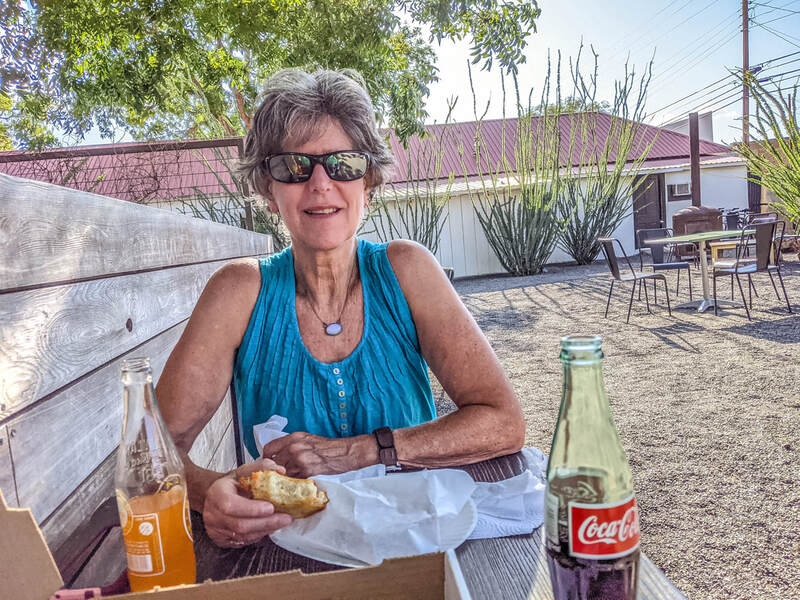 We take our leftovers back to the camper and put them in the fridge.  I plan on having cold pizza for breakfast…..something I have done more than once.  We drive back through this small west Texas town at dusk.  We get an ice cream at the Dairy Queen and wander off into the desert.

We arrive at the picnic area I wanted to shoot from.  Cars go by on the highway, but seem to have little effect on the place I want to shoot.  I set up and it is still a bit early for stars, so I shoot the sunset.  The sky is lit in gorgeous, deep colors.  The colors trail off from the horizon into a dark sky.  It makes what I think is a hell of a photo.

Sun and the moon setting in the west

About an hour after the sunset, the stars are in full bloom.  It’s so easy to see the milky way out here.  There is no humidity to muddy the sky, which is a bigger problem that you’d think.  I decide to set up and photograph one of the picnic sheds under the stars.  I have Laurie sit with me and it becomes a portrait that I shot with a remote trigger.  I REALLY like this photo.

We eventually head back to the camper and sleep.  The next morning we rise, break everything down and load.  We grab a quick shower before we head east.  We start our roll towards homes and I have my cold pizza breakfast…..not bad.  We have 1260 miles in front of us and have ourselves allowed 3 days to do it. 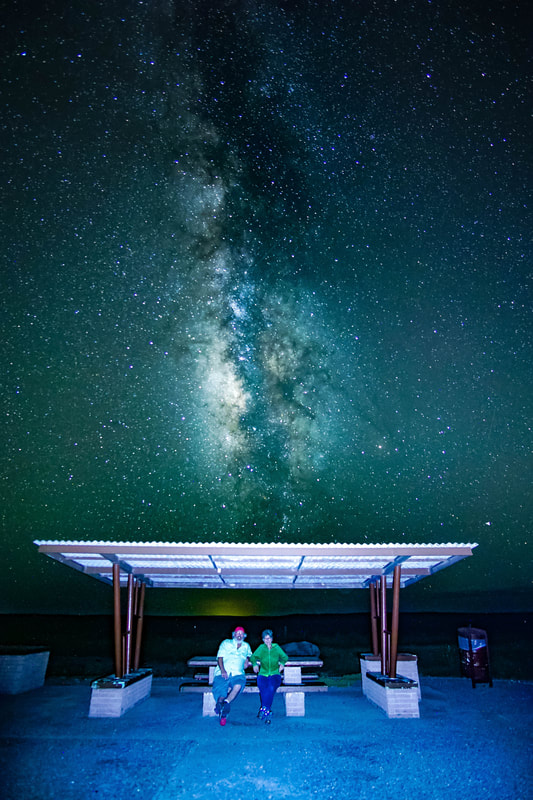 Self portrait with a Milky Way backdrop

We have decided to travel more slowly this trip.  In the old days, I would have gotten behind the wheel after working a full day and driven 20 hours to get wherever we’re going.  We don’t need to do that and I’m too damn old for 20 hour stints behind the wheel anymore.  I could do it if I had to…..but I don’t have to.  So we don’t.

Our first segment was our longest day.  I wanted to clear Dallas on day one after rush hour so I wouldn’t have to deal with crossing Dallas the next morning during rush hour.  While some will think “you’re still in Texas???”  You have to understand that the run from Marfa to Sulfur Springs (about an hour east of Dallas) was 600 miles/9 hours not including stops for fuel and food. 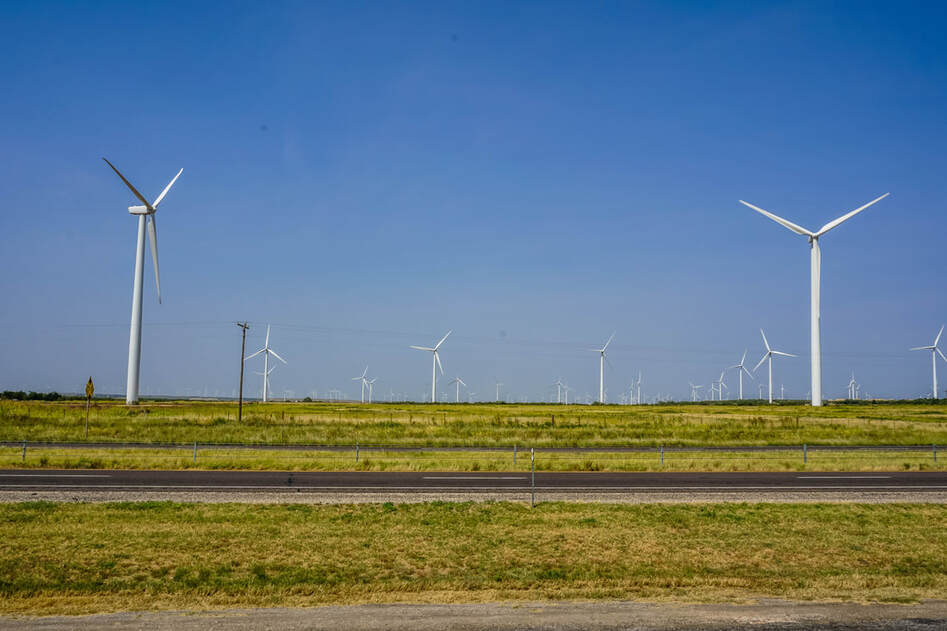 We cleared Dallas after rush hour and struggled to find a campground that wasn’t full.  I was really surprised as the kids are back in school and this was a Thursday night.  But so many people are traveling via RV now it is having an effect.  We finally found a park that is mostly permanent residents/full timers that had a couple of transient spaces.  We were happy to find them.

We got up this morning and headed east, with a Chik Fil A breakfast.  The jury is out on whether Chik Fil A minis or cold pizza.  We’ll let you decide on which is a better choice.  I’ve picked out a campground in West Memphis, Arkansas to stop for the night.  It’s a little over 5 hours plus any stops we make.  We take our time and make it in about 6 hours. 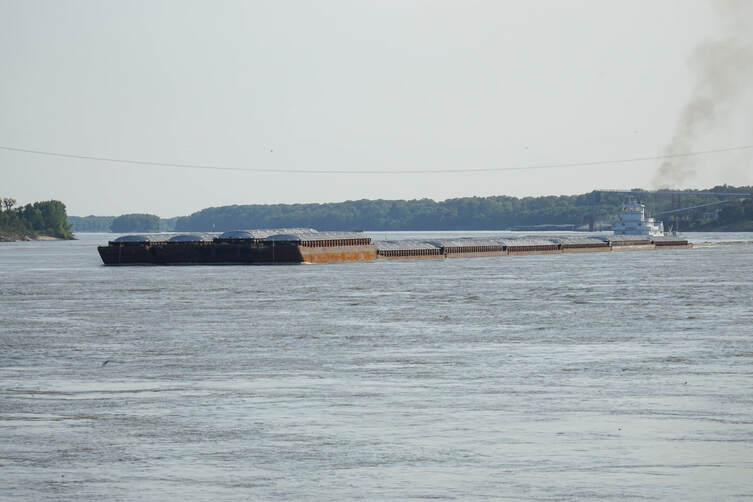 Pushing barges on the Mississippi

Our campground in West Memphis is called “Tom Sawyer’s RV Park”.  It is on the banks of the Mississippi River.  We arrive, do a quick setup, and sit on a bench by the river for about an hour.  We watch tug boats push barges up the river and enjoy the quiet.  The RV park is a LOT nicer than we expected.  We’ll have to remember this place for future trips. 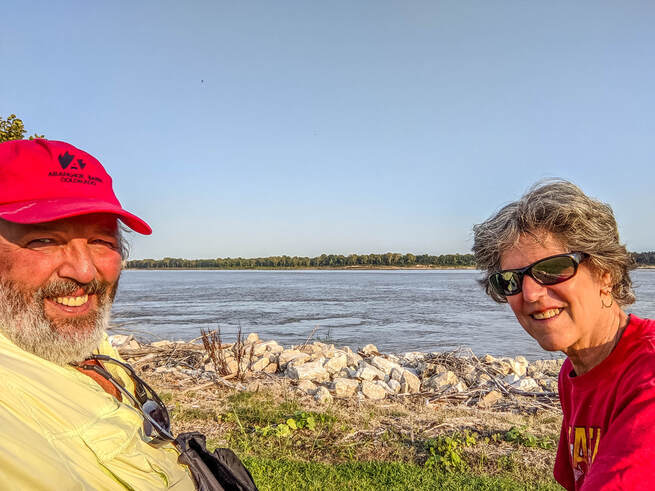 Sitting on a bench alongside the Mississippi

Tomorrow is our last leg headed home.  We’ll be back in Tennessee ten minutes after we leave the campground and have a 4.5 hour roll to home.  I’ll post a recap after we’ve been back for a while.  Thanks for traveling along with us.  I’ve gotten some great compliments on the blog this trip and I appreciate that.  I’ll post my final in a couple of days.
Previous Post