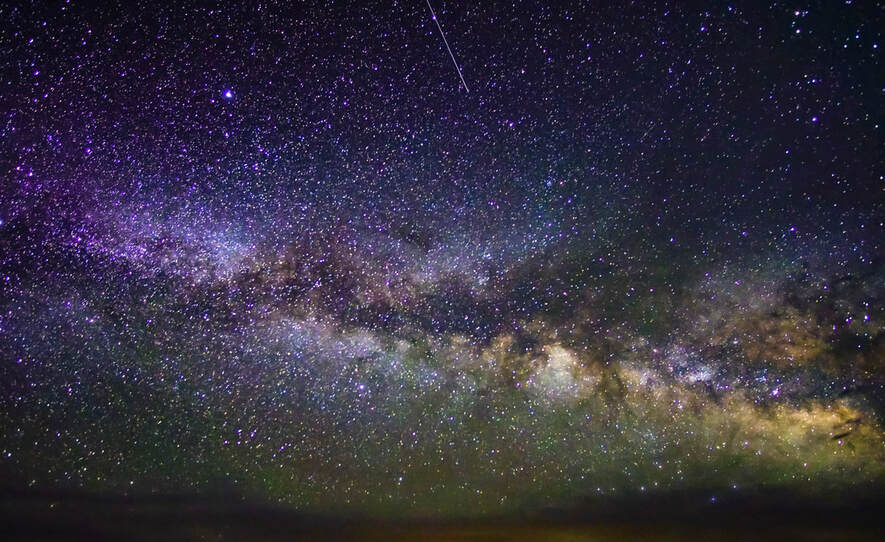 The Milky Way,    shot south of Capulin , New Mexico
​We had a great night doing star photos in Capulin, New Mexico.   I had planned on spending two nights there so I had two  chances for a clear sky and it was a good thing as night one was clouded over.     Astrophotography is a hit or miss thing and sometimes you wind up putting in the effort and the sky just doesn't cooperate.    But we got our night in, shooting in front of  the ruins of an old stone house miles out in the desert.    You 'll see the results in the photos on this post.

We woke this morning and actually slept late.  I received a father's day call , made one to my dad, then we started our day.  We weren't in a big hurry as we were only traveling  148 miles, a very short day for us.      We  prepared the camper to travel, loaded everything, and hitched up the truck.    We made the trip in around 2.5 hours and are now set up in a nice RV park in Westcliffe, Colorado. 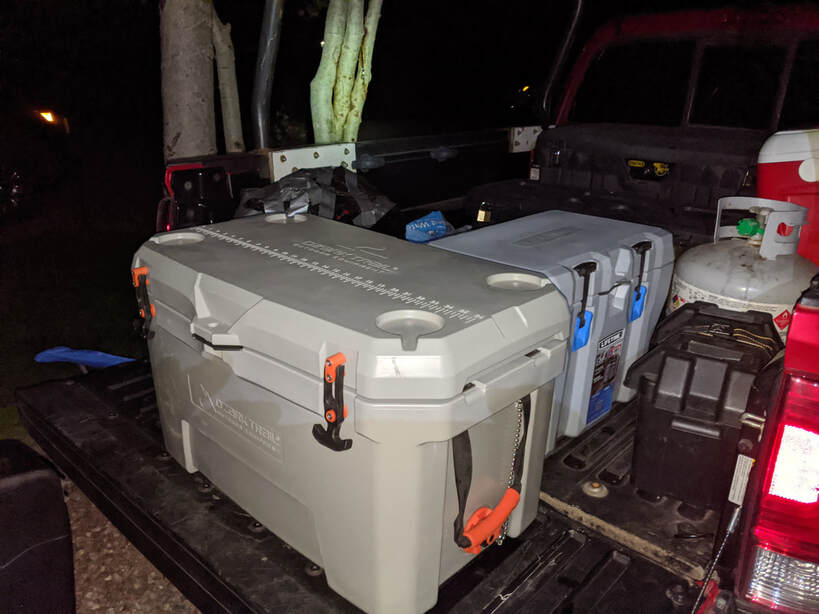 Our fancy new coolers, standing in for our busted fridge
​We had mentioned our camper problems previously.     Our refrigerator quit working and we had to buy  fancy new coolers to store all of our food.    We bought them in Oklahoma City, transferred all our stuff, and cleaned out the fridge.      I couldn't figure out who would buy those expensive coolers.....well now I know.  They are great at keeping things cold and the ice lasts a really long time.  They were a good purchase.

We had planned  on "boondocking " in the area we are at.  My cousin Michael has a vacation home here and gave me pointers about where to stay off grid.   We had planned on following his advice and staying in a "dispersed" camping area near Hillside, Colorado.   We had  the fridge problem all figured out and were ready to stay in the wilderness.......but we couldn't figure out a way around one thing.  That one thing would be bears. 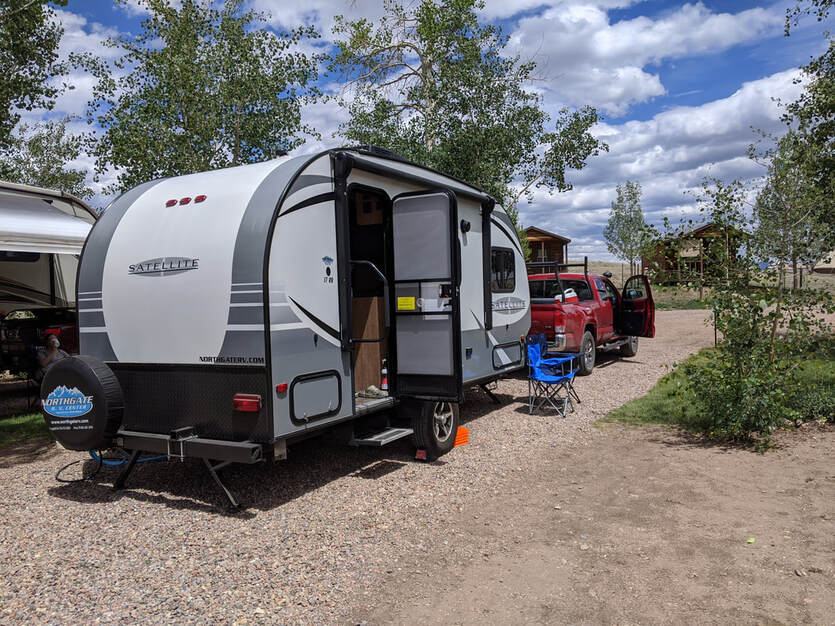 Set up at Grape Creek RV park, Westcliffe, Colorado
​
Our camper is small and while a great size for two it doesn't have a lot of extra room.  So why don't we just leave the coolers outside?  Coolers are like a food pinata to bears and we have nowhere to get the coolers stored properly.    I've personally watched a bear open a metal cooler like a can of sardines.   We opted for the RV park and it's worked out well as this park appears to have no bears, good cell service,  full hookups, and all the other comforts of home.   Yeah, I would have liked to boondocked, but it wasn't in the cards.  Equipment failure caused a change, and we adapted.

Most everyone here is wearing a mask and it's required if you enter a business.      Cases here are low (they've only had two in this county since this thing started) and they intend to keep it that way.   While there are visitors, everyone is distancing, wearing masks, washing their hands, and all the fun stuff we have to do nowadays.   There are signs posted everywhere reminding everyone of the protocols required.    It is quite a contrast from Tennessee where very few wear a mask and they have monster infection numbers.  I told Laurie  today that New Mexico and Oklahoma have fewer cased for the entire state than   Nashville and the surrounding counties. 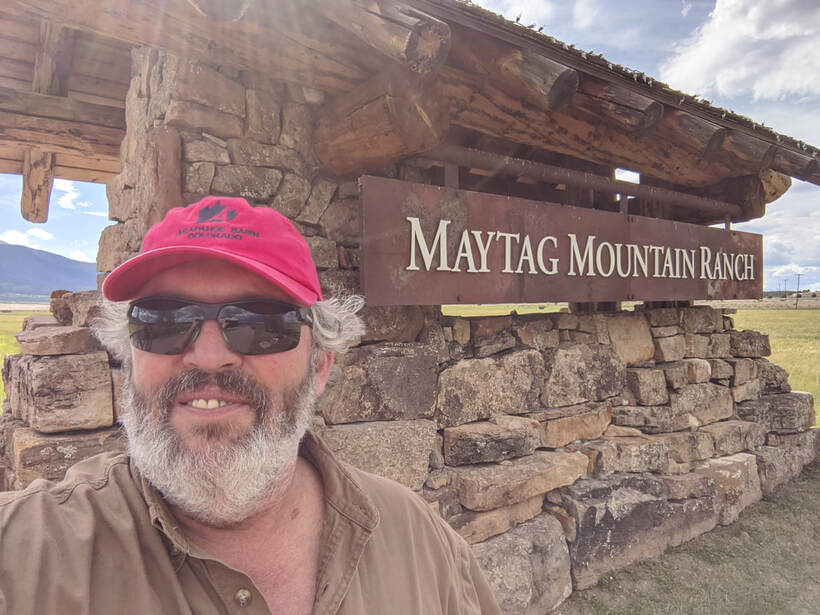 Loitering at the gate of my cousin Michael's place.  To quote  Charlie Daniels "I figured I oughta go ahead and split before the cops got there".
​We had a takeout sandwich at a restaurant/coffee shop  and ate it outside on a table .    They had several tables all about 10 feet apart.    Outside seating apparently wasn't the norm here but has suddenly become quite  popular.   The locals are playing the game by the rules and so are the visitors.....at the insistence of the locals.     Most of the recreation here consists of hiking and exploring, with little person to person contact.

We chatted with the couple on the campsite next door  this evening and we sat in chairs on our campsite and they   sat in chairs on theirs.   They told us they were coming down out of Wyoming and heading home to Texas.    The national parks along the way  (Yellowstone, Rocky Mountain National Park, etc.) are restricting visitors and only allowing people to enter the park if they have a reservation.  Not a reservation to stay or see  a certain attraction.....a reservation just to get in.     The parks are turning people away who show up without a reservation. 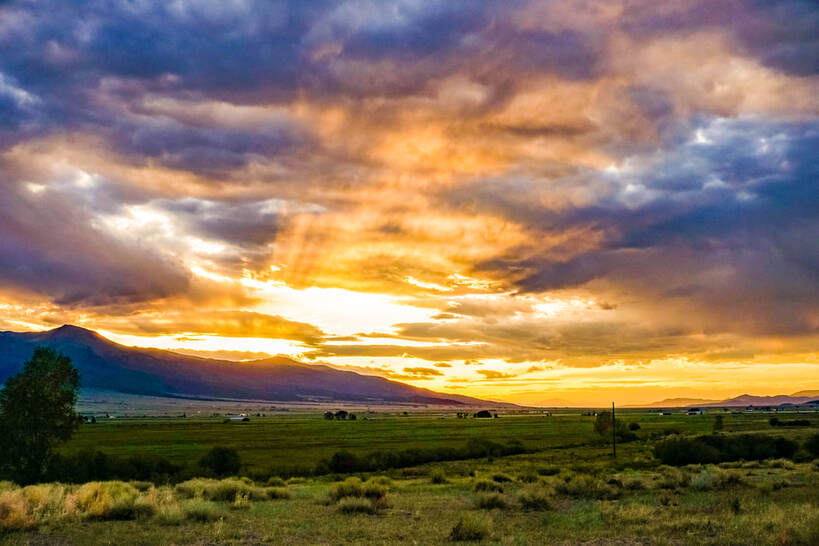 Sundown over the mountains
We took the truck and explored some of the back roads, jeep paths, and surrounding areas.   We took photos of the scenery  which is gorgeous.   Laurie stated that she finds Colorado much more visually appealing than New Mexico, at least the part where we were.   There are many gorgeous areas of New Mexico but where we were at was very remote and not as visually striking as other areas.

Our attempt to photograph the stars tonight didn't work out.  Once again we're in a very dry place that gets very little rain, and we have heavy cloud cover.   Maybe we'll get lucky tomorrow night.