On the twelfth day of Christmas 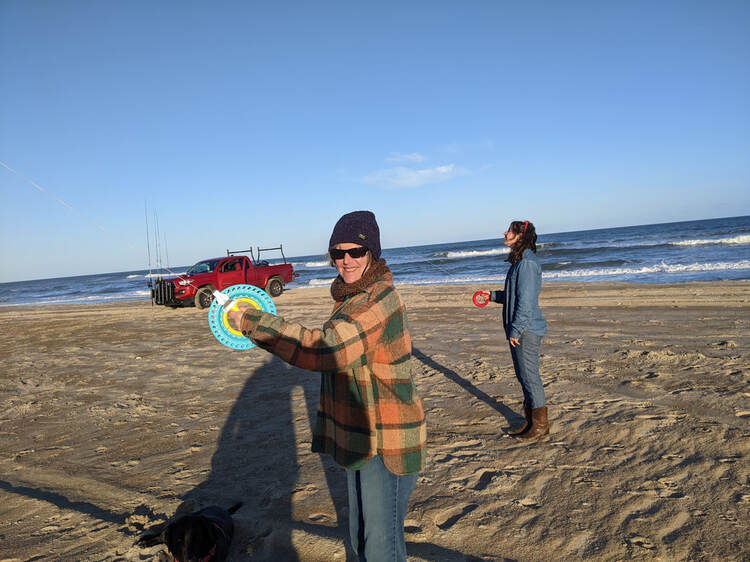 ​I didn’t post for a few days….and I planned on doing that.  You can’t have the twelve days of Christmas when you’re gone for 14 days.  I also ran out of things to write about.  There are only so many times you can say “we sat on the beach, fished, read, and watched the ocean”.  While pleasant and we’re very lucky to be able to do it, it is difficult to make it sound exciting.  I do have some new photos, and in place of Christmas past photos, I have some old family photos from the late 60's-early 70's.

We haven’t traveled and spent two weeks in the same place…….ever.  We usually travel and see new and different things, and as we all know that isn’t an option this year.  It’s easy to stay excited about what you’re seeing and write enthusiastic posts when everything is new.  When it’s the same for a while enthusiasm wanes.  We were, however, in a very nice place. 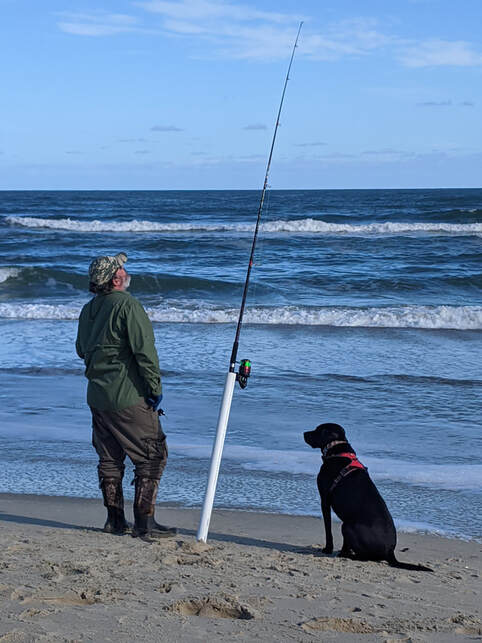 ​We did enjoy it, Laurie especially.  One of the things I found difficult to leave is that I didn’t have to worry as much about being exposed to Covid.  It’s always there and you don’t want to let your guard down, but that’s so much easier in a place where everyone wears a mask and the infection rates were at one point 17 percent of what they were where we live.  It was also off season with way fewer people and we avoided others.

Covid-19 numbers where we live have gone down since we arrived in NC, but they’re still 3 times what they are on the Outer Banks.  The Nashville bombing occurred while we were gone, and a lot of other things have gone on since we left, and I’m not looking forward to coming back to all of that.  I found it quite calming to be this isolated, even if I was running out of things to do.  It was a nice problem to have. 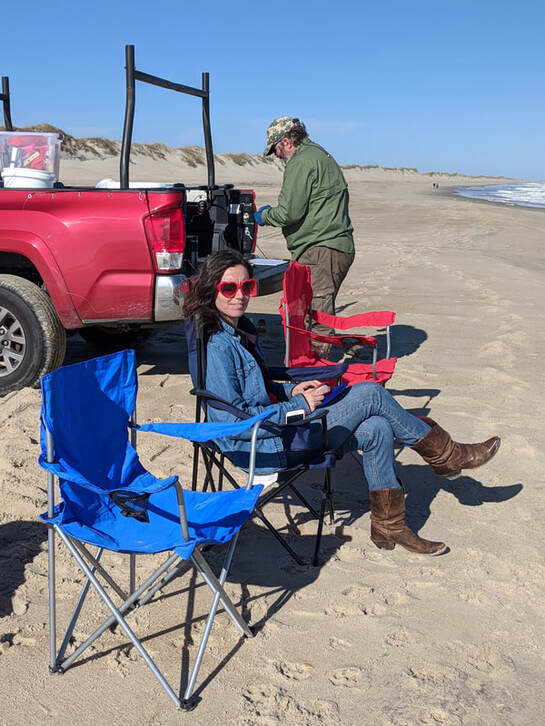 We stayed to ourselves, did all our own cooking, and the things we did for amusement were solitary…..or at least just us.  We didn’t eat in a single restaurant, we shopped for groceries once and if we were short something we went to Dollar General.  Quick in, quick out, as little contact as possible.  We even drove by the Dollar General once and said "too many cars in the parking lot, we'll come back later".

I wish the fishing had been better.  I was looking forward to that, but it’s not the best time of year.  The water has cooled off and many of the fish have left for warmer waters.  Fishing here in the early fall could even be called frenetic with strike after strike.  In the winter it is very slow with only the occasional shark breaking the monotony.  We flew kites as well, walked on the beach, did photography, and watched the sun set. 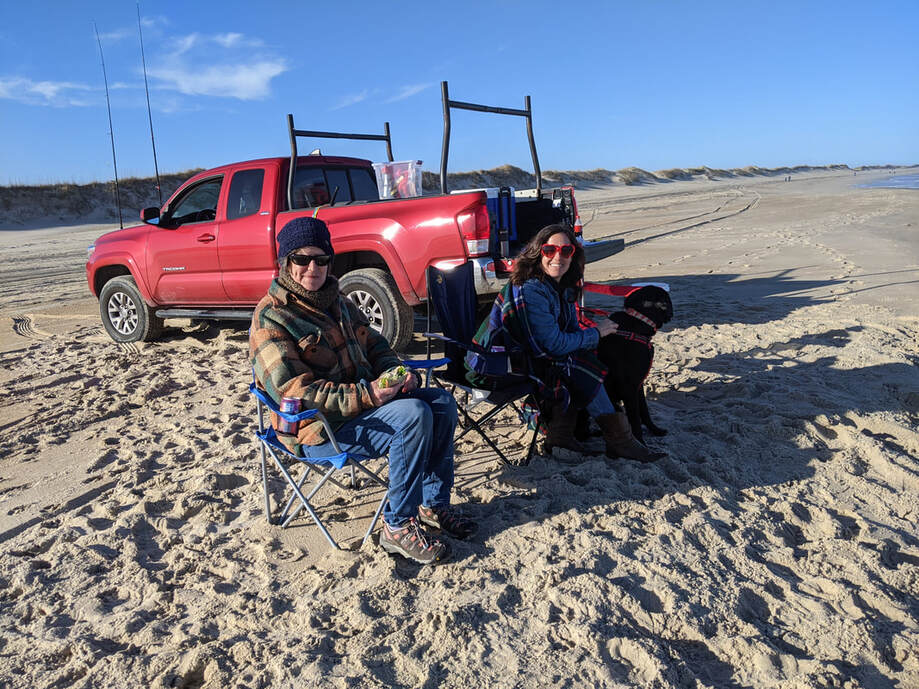 The beach looked like this for two weeks.  Few if any other people.

Towards the end of the two weeks I was starting to get bored, but not nearly as bored as I would have been if I spent the last two weeks on the farm.  We found things to stay occupied like reading. Laurie would do crossword puzzles, and I would edit photos that I took during the day.  There was a really cool shuffle board in the house, cable TV, ways to stay occupied even if it was raining outside.  Not being home sort of forces you to not work.  If we were home I would have been working on something.

As for photography, no stars.  It’s the wrong time of year for that and the milky way really only shows itself in late spring, summer, and early fall.  But the Outer Banks have many other opportunities for pics.  Late night beach photos, the fog rolling in, rough seas.  All make for good photos. 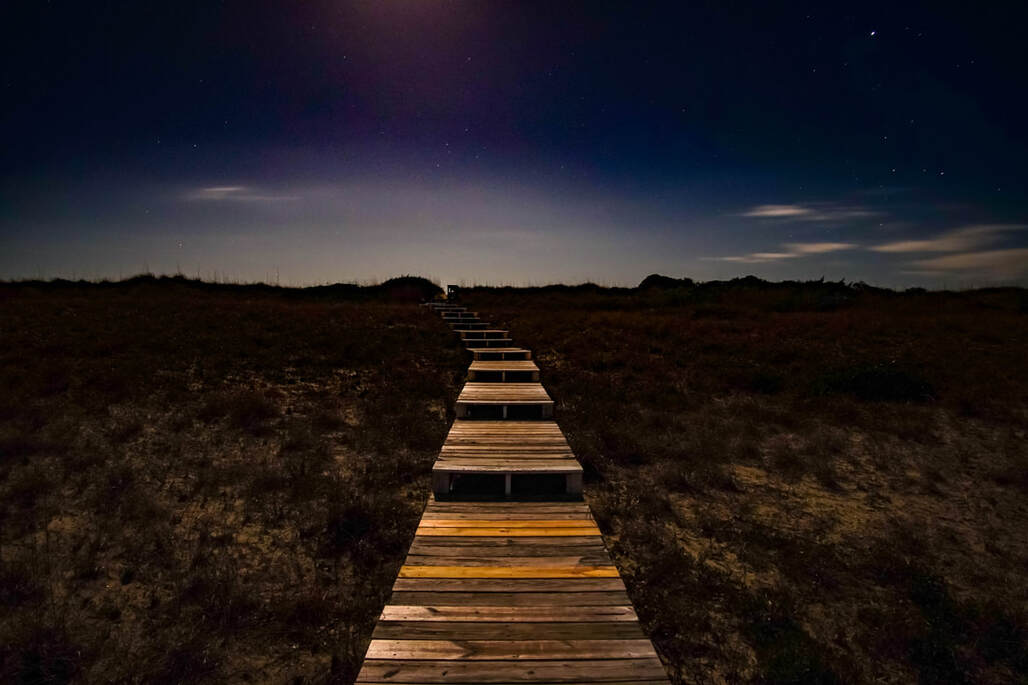 Walkway to the beach from the place we were staying, night time.

The weather was actually much better than we expected.  We spent the day on the beach every day except New Years Day.  Most days were reasonably temperate if not somewhat windy.  Christmas eve brought wicked storms with over 4 inches of rain and 70 mph winds.  We didn’t lose power so it was a good day.  There was some minor flooding but it didn’t interfere with our wanderings.

We rented a huge house that normally sleeps around 14-16.  We didn’t plan on having that many but wanted to give anyone that wanted to join us room to spread out and be distant from each other.  The reality is that we never had more than 4 people here.  When Mary and Jeff left, they were replaced by Heather (and Ryan came for New Years Eve).  ​ 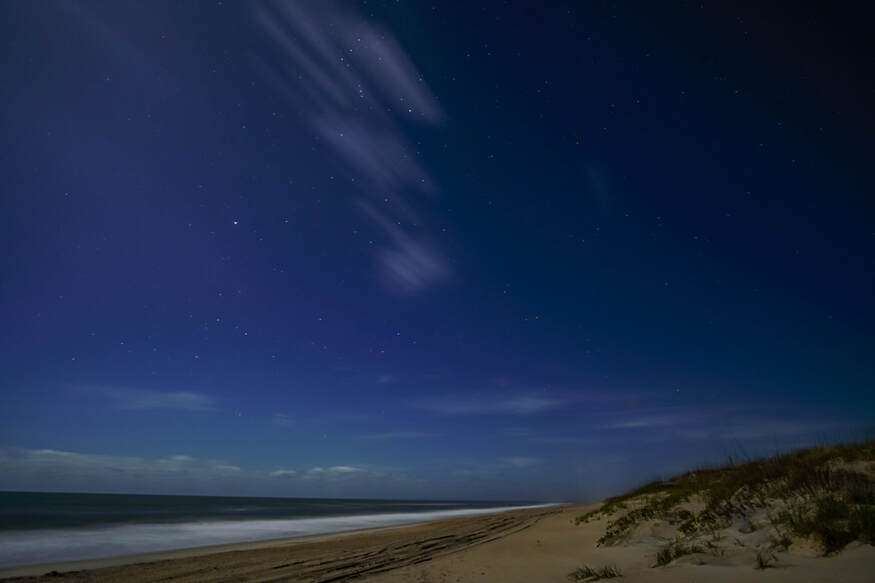 ​Heather and Ryan work from home and their exposure is minimal.  Jeff and Mary are retired and have been careful to quarantine during the pandemic.  With this house, the other two not only had distance from us, they had their own floor.  It wasn’t difficult.  Not to mention that the bulk of time (at least during daylight) was spent outdoors.

Everyone tested right before they came.  We realize that you’re only dealing with a specific moment in time when you test, but we tested and came to the beach and cut contact with others.  Not perfect but it is a way to have some idea what you’re working with.  We viewed testing as just one of the tools we had to work with and tried to do other things to mitigate risk. 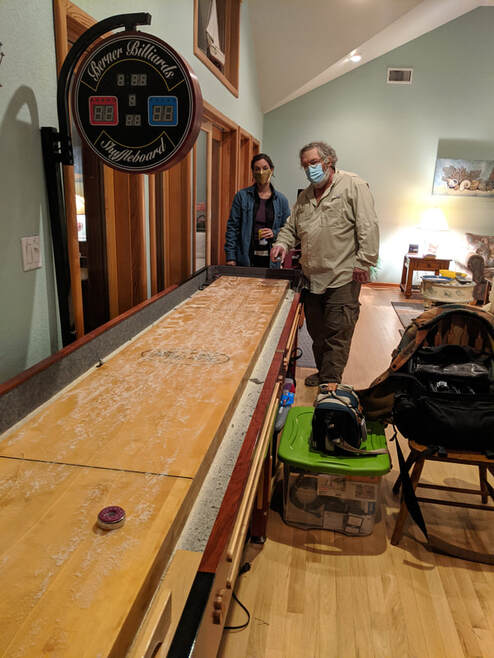 We didn’t congregate, we didn’t socialize.  We didn’t go to restaurants and we didn’t go around crowds, or other people for that matter.  We would go days not speaking to anyone other than each other.  With the local infection rate and our isolation from others…..we felt were safer than we are at home.  People want to socialize.  They/we want to get together with others.  It's normal.  It's a human thing.  But we have to keep from doing that for a while.

I keep reading about more and more deaths from this.  I see Facebook posts from people I actually know across the U.S. who are burying family members.  We arrive home to find out a close friend was exposed and is in quarantine, and 3 members of her family currently have Covid.  Arriving back home, where a lot of people refuse to take this seriously and refuse to wear masks does weigh on my mind.    It was such a relief to be isolated from that for a while. 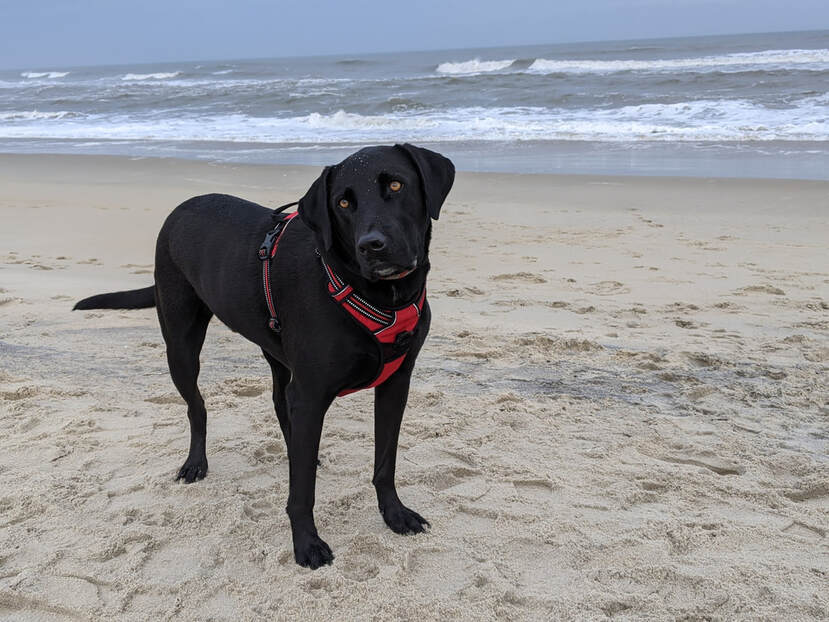 I miss the excitement of new and different places, cultures, customs, and food.  I miss riding trains from small town to small town.  I miss the excitement of waking up in different places begging to be explored.  I miss meeting and socializing with new people. I was starting to get bored on Hatteras, but with things in the world now, boredom is starting to look quite appealing.  I don't expect to be able to fly anytime in the near future.....we'll probably be back before long.  I know how much Laurie would love that.

Thanks for following along even though it got a little boring at times.  I hope the photos made up for it, and there are more photos with this post.  Maybe the visual makes up for the lack of narrative…..and hopefully 2021 will help make up for the year of 2020.  Be sure to take a look at the old pics below. 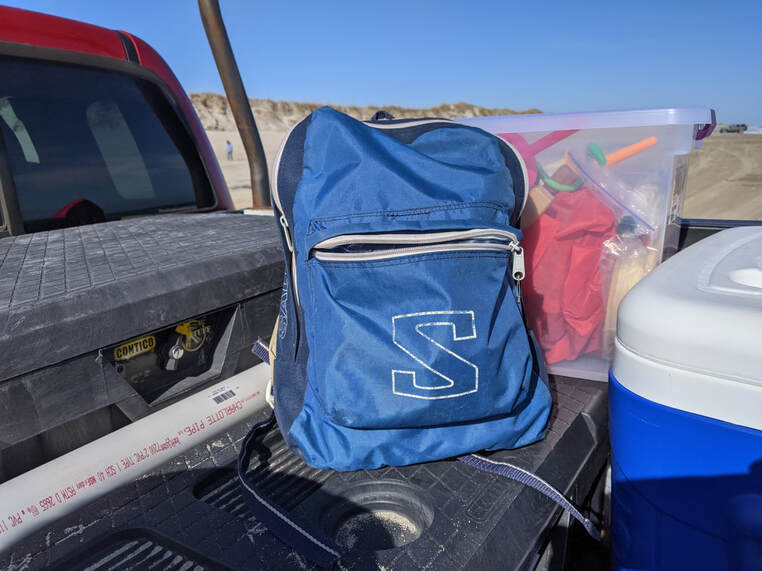 I bought this backpack in 1984.  It rode on my back for many ski seasons, at mountains in West Virginia, Maine, Vermont, New Hampshire, and probably others.  37 years later, my daughter carries it every day.  I like that.