ADVENTURE31.COM
​May you live in interesting times:
Low/No contact travel in the southwest and the Rockies
Into gold mining country/Day  8 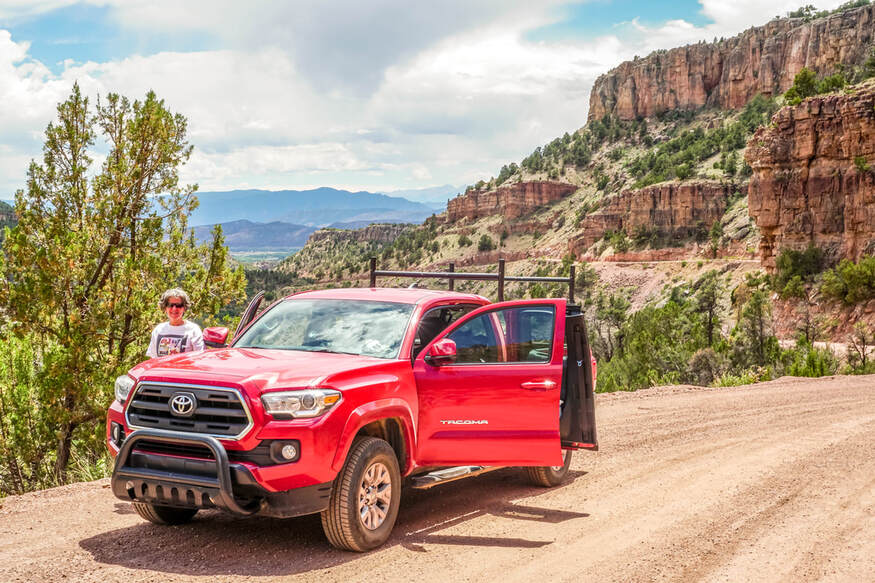 Shelf Road, part of the  Gold Belt Scenic Byway
​We woke up this morning and I didn't feel terrible.    We were able to extend two more days in Westcliffe, Colorado at 7800 feet.   My oxygen sats were not what they are at home but they weren't terrible (93-94 percent)  and I decided to take measurements at different elevations while we travel to establish a baseline and try to find a way to predict when I'll have altitude problems.

I had visited a town called Cripple Creek on my last trip and it was in such a beautiful area I wanted  to share it with Laurie.   I planned another dirt road excursion along  the Gold Belt Scenic Byway, a collection of old mountain roads that brought people into the mountains to mine gold.  The views are to die for and it was a great way for me to keep from exerting myself too much (another trigger for altitude issues).   We headed out on today's drive.

Supermax, as close as I felt comfortable getting
​Our first waypoint was going to be Canon City again.   Canon City is well known for one unusual industry, and that would be prisons.   Several federal facilities are here as well as a Colorado state prison.    One of the federal facilities is the Supermax facility unofficially known as Alcatraz of the Rockies.  It is actually in Florence, Colorado which sort of butts up to Canon City.     We passed by it but did not stop for a photo as they didn't look overly inviting.

The Supermax here holds a who's who of   America's worst.    They include "El Chapo" the Mexican drug lord, Eric  Robert Rudolf the olympic park bomber, the guy that did the Boston Marathon bombing, the Unibomber,  the shoe bomber guy that tried to bring down a plane,  Terry Nichols one of the Oklahoma City Bombers,   one of the guys that helped plan 9/11,  one of the 1993 World Trade Center bombers, a real basket full of scumbags.     While an interesting landmark I'm pretty sure they  don't have a visitors center.   We kept on driving. 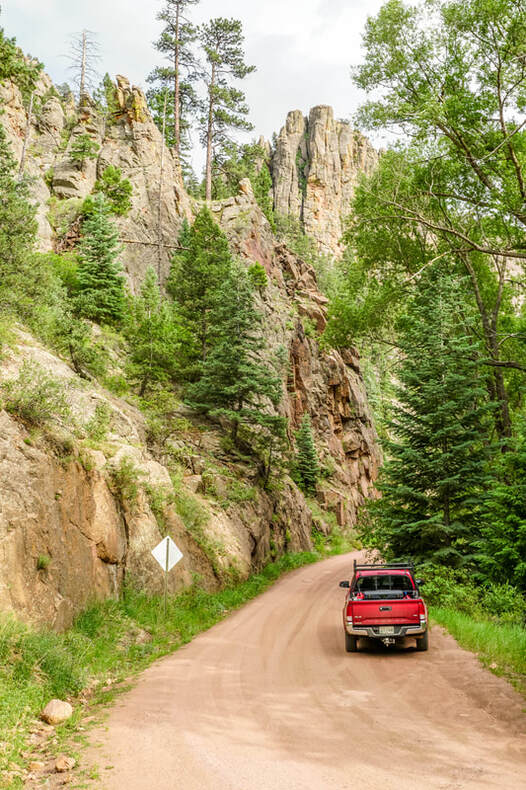 Another stop for photos!
​We headed up one of the Gold  Belt Scenic roads, taking in all of the rock formations, seeing lots of animals, and taking in great views.    It is a gravel road and while they say it is "rough", I would feel comfortable taking Laurie's Camry on it.   It's not a paved highway but far from rough.   We arrive in the town of Cripple Creek an hour or so later.

Cripple Creek was one of the main mining towns in Colorado.  There is also an active open pit gold mine  still in operation there.   The town fell on hard times and became mostly abandoned.     In 1991, the state of Colorado legalized gambling in some of the old mining towns and the place once again became a boom town.   The old buildings were renovated and repaired and turned into gambling halls and casinos.   Bus tours come in daily from Denver and other nearby cities.    Cripple Creek made a huge comeback. 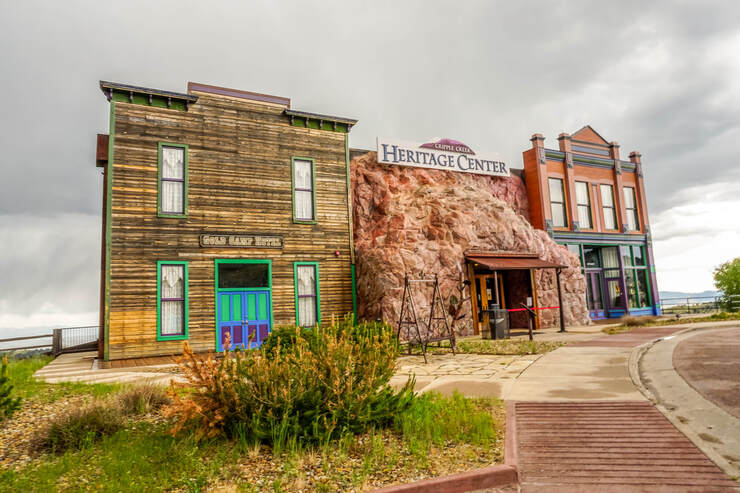 Cripple Creek visitors center
​Cut to current day Cripple Creek and the fallout from COVID-19.      The casinos were closed for many months and just recently opened.   The slot machines are operational, socially distant, and you have to wear a mask to enter.     No table games are currently running and that includes my game which is poker.   Even if  poker had been available, I'd have passed under current conditions.      Crowds are nowhere close to what they were when I played a tournament here last October.

Our view of Cripple Creek was  by car only and we didn't go in anywhere, with one exception.  On the top of a hill outside of town is the Cripple Creek visitors center.   I had visited it on my last trip and wanted Laurie to see it.   We arrived to an empty parking lot and only two or three people inside the very large building.    They require masks of all visitors and we put ours on and went in for a brief look at the place as well as the view.     We didn't stay long, we didn't come within 20 feet of another person, took a quick  look, and headed back out to the truck. 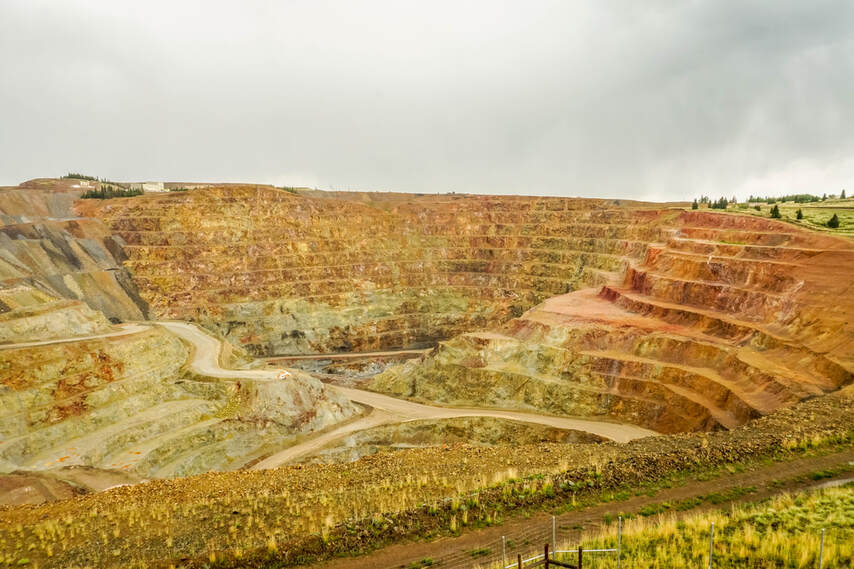 Active open pit gold mine
​We drove out of the visitors center and started around a road that looped the active gold mine pit and ended in the town of Victor.    We stopped to look at abandoned mine structures, took photos from an overlook at the operating gold mine, and proceeded on towards  Victor, around 3 miles away.    Like the other days we have been here it started to rain, and actually rained quite hard.

We would have walked around in Victor but had to   be happy with a few quick photos as the rain was really coming down.    At the height of the gold boom, Victor had a population of 17,500.  The current population is around 400.    Lots of the old mining houses are still there, and the town mostly caters to random tourists and it also has several bars.    That's about it.   It is sort of an "abandoned place" that refuses to go quietly.     I wish we had better weather and could have walked around. 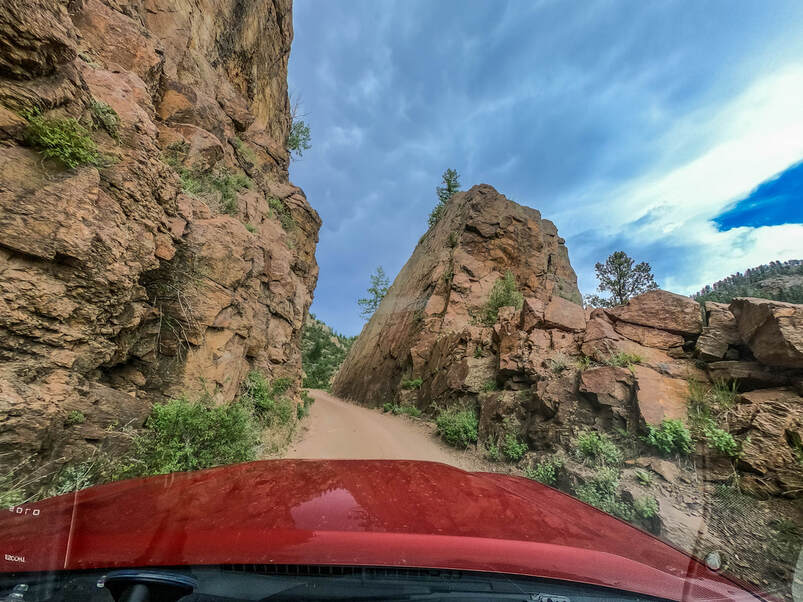 Tight squeeze on Phantom Canyon Road!
We left Victor and headed back towards Canon City on another one of the Gold Belt Scenic Byway roads called "Phantom Canyon Road".   This road is my favorite road in Colorado.......so far.     History, rock formations, views for miles, it is a great way to get a feel for "real" Colorado.       Our trip down Phantom Canyon Road took around 90 minutes and we wound up back in Canon City.

We headed back to Westcliffe from there and relaxed for the evening.  My oxygen stats  showed a pattern throughout the day that will help me manage altitude issues in the future.   Up over 10000 feet, they dropped to 90, but when we got into Canon City (around 5500) they shot back up to 97, which is pretty normal for me.   I'll be able to watch these numbers in the future and know when I need to head to lower elevations.    Laurie also pumped me so full of water I'm afraid I'll spring a leak.   She made sure I was hydrated today!

I'm not sure where we're headed tomorrow, our last day here.    Be sure to click on the gallery below for more pics!   Stay well everyone! 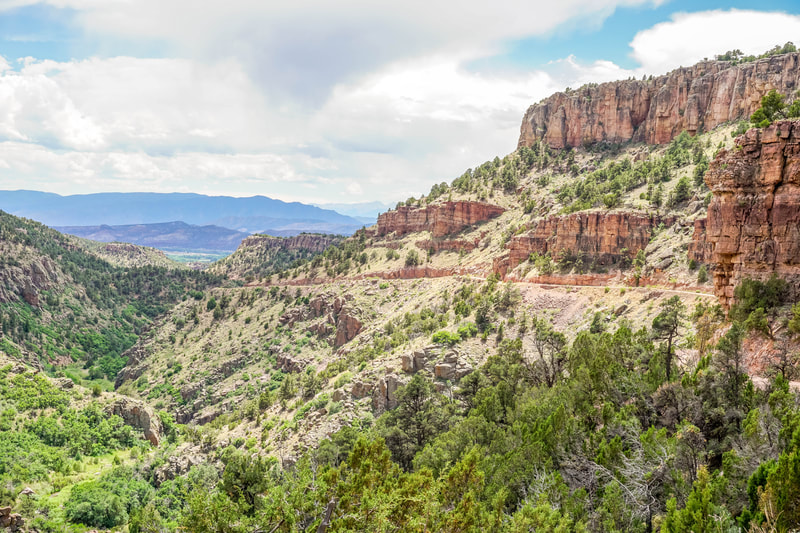 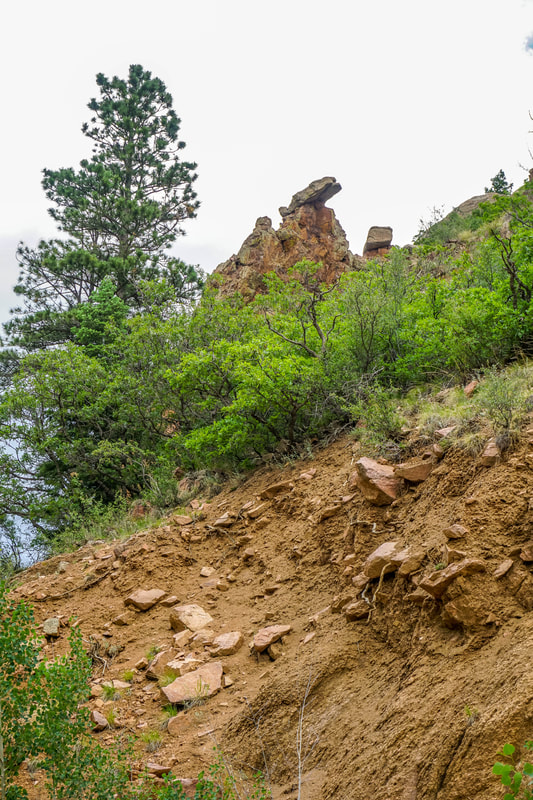 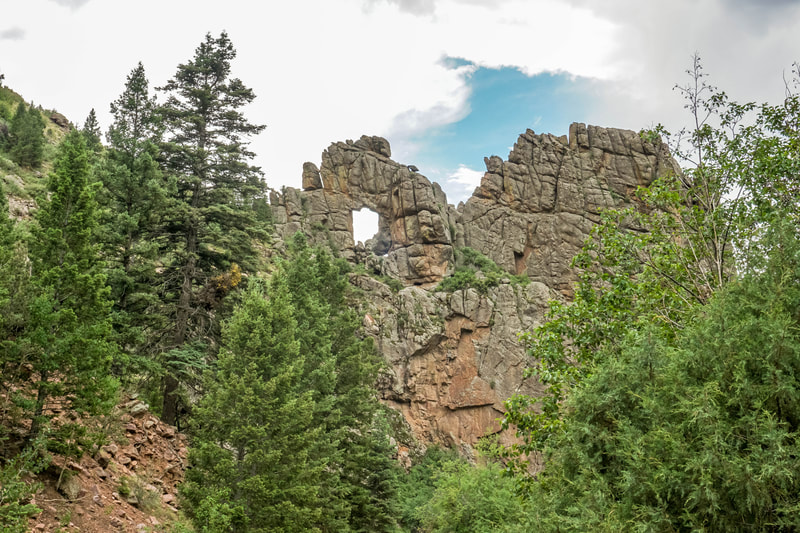 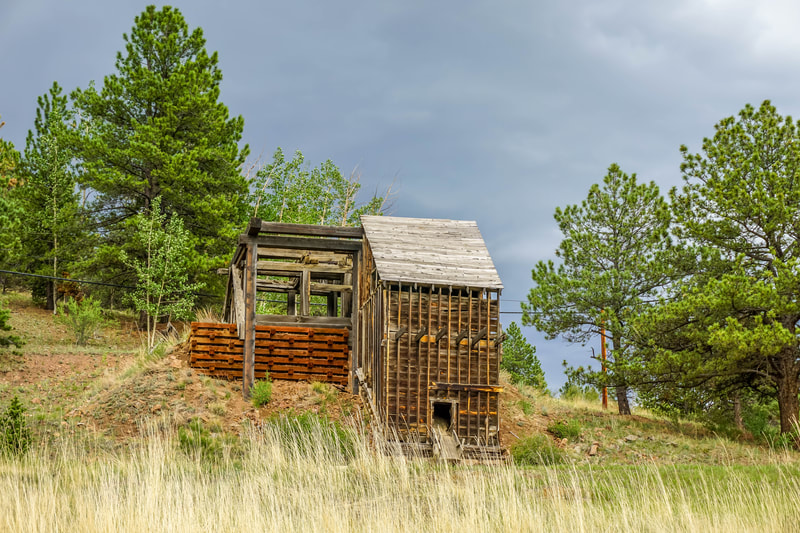 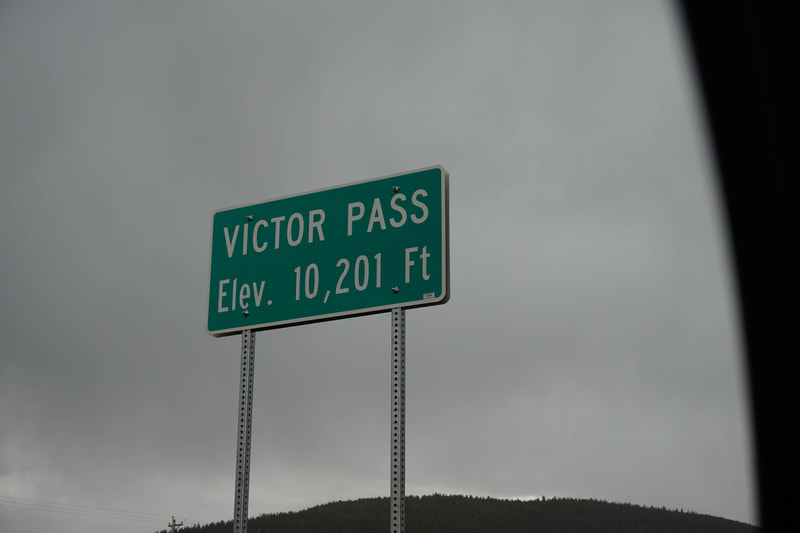 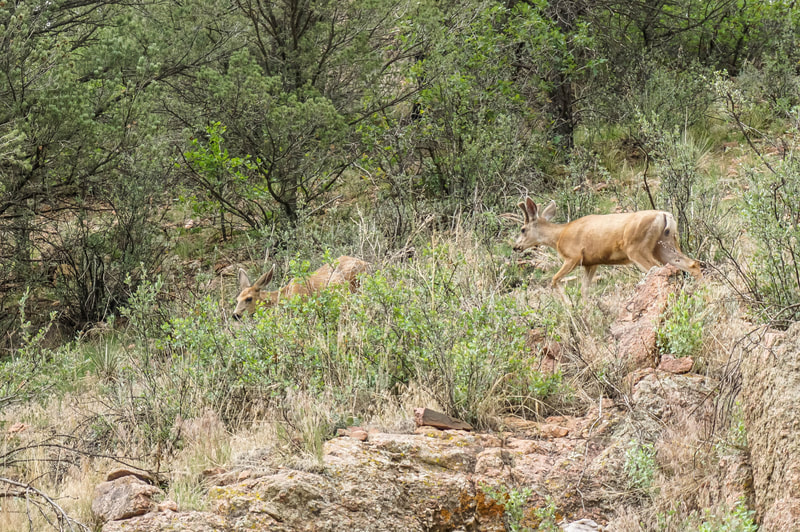 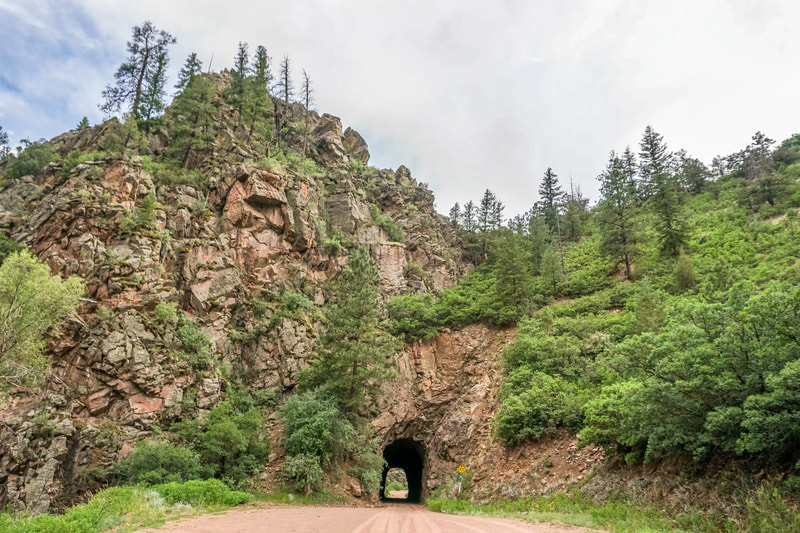 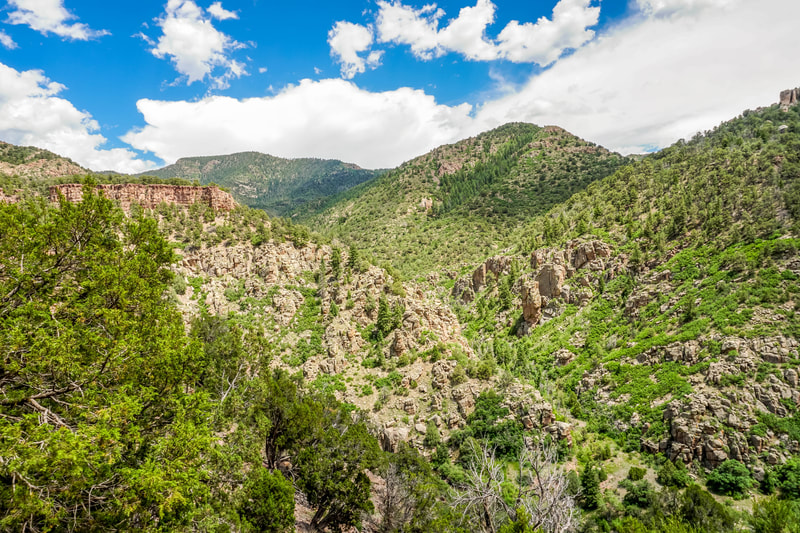 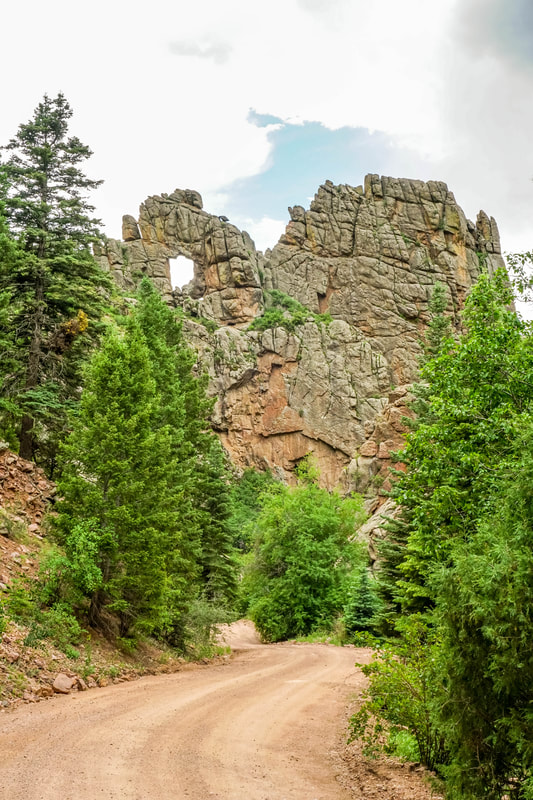 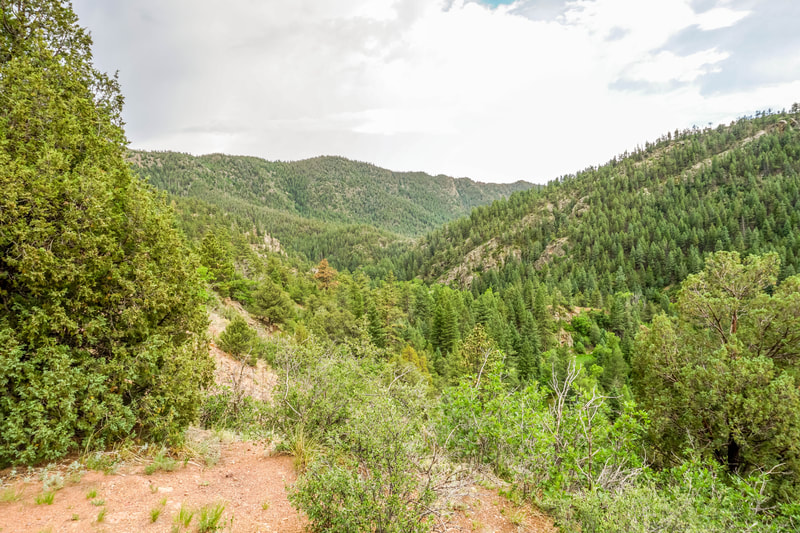 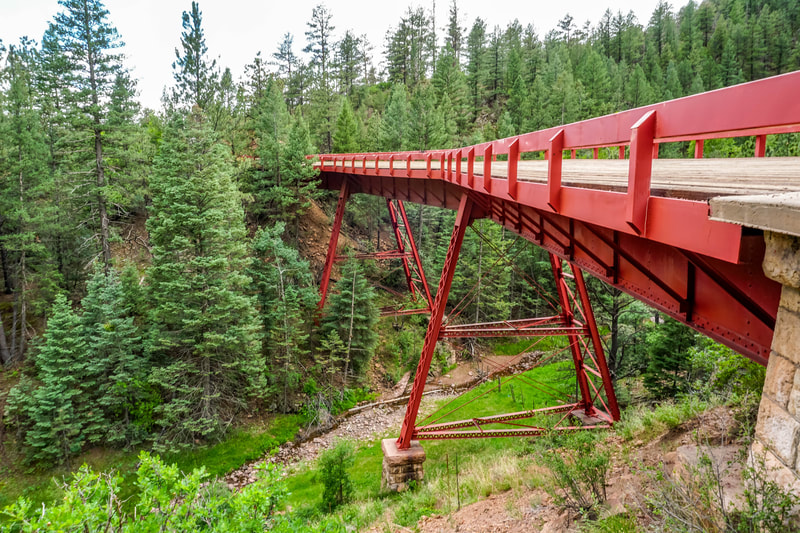